The Noteworthy Life of Howard Barnes 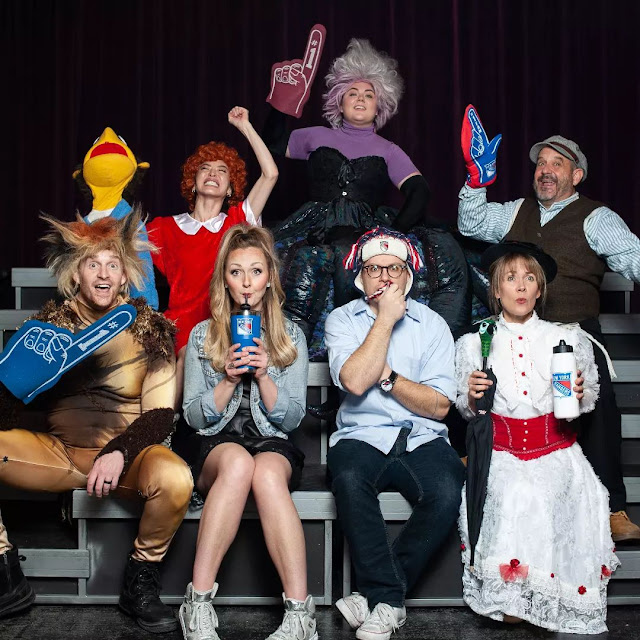 The cast of The Noteworthy Life of Howard Barnes (Photo credit: Glenn Ross)

Innovative, touching, and VERY funny, BDT Stage’s production of THE NOTEWORTHY LIFE OF HOWARD BARNES, is full of everything you love about the American Musical!

It's truly refreshing to come upon a new musical comedy about which one knows nothing. Full of whimsy and surprise, The Noteworthy Life of Howard Barnes is exactly that.

With a fun concept designed for lovers of the American Musical Theater and their significant others who don’t, this show will WOW you!

Howard Barnes is a middle-aged American male who hates musicals only to awaken one morning in ‘the musical show of his life’ that’s a relentless explosion of musical theatre moments from which he struggles helplessly to escape.

Peeping through the cracks of his new experience you may find your “Memories” of Jellicle “Cats”, “Phantoms” and little red-haired orphans as well as practically perfect nannies that are just “Misérables.” There’s even a pseudo coda in this show that may remind some in attendance of the final ghost light in “Pippin.”

One of my favorite musical sendups in this show that’s 'littered' (I know I already mentioned Cats!) with them, is that of the "Cell Block Tango" from "Chicago," featuring Howard’s ex girlfriends!

Chas Lederer is stellar as our leading man, Howard. His great stage presence and dynamic singing voice make one know that this is just the first of many leading roles that he may enact upon the BDT Stage!

As Howard’s guide through this labyrinth of musical mayhem, McKayla Marso - McDonough is smashing as she teaches Howard the wonders of vulnerability as he learns to "hear the music!" Lovely to look at, and with a soprano to die for, you can’t take your eyes - or ears - off her.

Wayne Kennedy’s character, the musical producer Steven Von Shwartenheim, is a great deal like the great Wizard of oh, you know. Wayne also creates magic from the director’s chair as well as doing sound design. Kennedy is one of the BDT veterans who has stunned us with brilliant star turns from everything from "My Fair Lady’s" Henry Higgins to the King in "The King and I" to Tateh in "Ragtime" to Amos ("Mr. Cellophane") in "Chicago."

Tom Quinn’s projections complement M. Curtis Grittner’s scenic design and Brett Maughan’s lighting design in such a way that the theatregoer is dazzled by the onslaught of reality one moment and a kaleidoscope of fantasy the next. The color palette for the show sometimes makes one feel as though these bright splashes of primary colors were just poured right out of the can.

The music direction by Neal Dunfee of the BDT Stage band is ear-pleasing indeed! Mary Daley’s vocal direction is superb.

The writing of the dialogue may leave one desiring a bit more at the top of the show, but after all it is a musical, and there’s enough spice in the vocals and dancing that come romping through so quickly that you’ll hardly notice.

The book and lyrics are by Christopher Dimond with music by Michael Kooman.

PG13 for language and suggestive themes

p.s. Don't forget they have a scrum diddly pre-show menu with all things yumma grande!!! On this particular night the chef's special was Short Ribs that were DEELISH!!!

Posted by David Marlowe Theatre Reviews at 9:35 AM No comments:

Performance Now’s production of “1776” is SPECTACULAR!!! 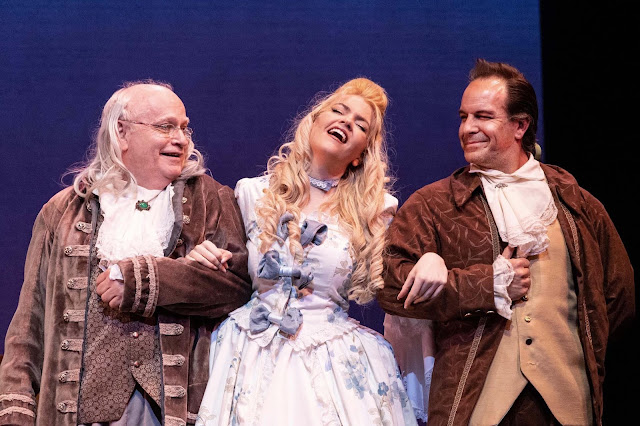 With book and music by Sherman Edwards and lyrics by Peter Stone, “1776” won the Tony Award for Best Musical, Best Direction (Peter Hunt) and Best Supporting Actor (Ronald Holgate) in 1969.

Based upon events that occurred during the Second Continental Congress that led up to the signing of the Declaration of Independence,”1776” gives us  our founding fathers with all their human strengths and fragilities - warts and all!

With the much-disliked delegate from Massachusetts, John Adams, at center stage, we follow the arguments and actions leaning into a resolution for revolution.

The first Broadway show to have been seen by this reviewer after his escape from the boredom of Montana (the next night was HAIR), “1776” holds a special place in my heart.

I remember the cab driver asking me on the way to the theatre,‘how the f@#@ did I get a ticket for the Best Musical on Broadway?’ I told him ‘all you have to do is order tickets nine months in advance.’ He then shocked me by saying that he’d never attended a Broadway show in his life. But I digress.

By now Denver theatregoers must have become aware that any show directed and choreographed by Kelly Van Oosbree is going to be stellar. This is another example of Ms. Van Oosbree’s outstanding work!

Michael Travis Risner thrills with his performance in the role of John Adams. Few of the actors cast as Adams in recent productions have given such a powerful portrait of this much-disliked political force of nature.

In this mostly male-driven cast the fair sex is represented by Adams’ wife, Abigail and Jefferson’s new wife, Martha. Carolyn Lohr is an outstanding Abigail Adams. Her gorgeous voice blends sonorously with that of Michael-Travis Risner (John Adams) in their duet (Yours,Yours,Yours),a song descriptive of their longing for each other while separated due to her familial and his political duties.

Joyfully sexy and vocally divine, Colby Reisinger delivers an exhilarating Martha Jefferson with her singing of “He Plays the Violin.” Her gorgeous swirling frock, created by Susan Rahmsdorff-Terry, very nearly becomes a character all on its own.

Lars Preece is hilariously bombastic as Richard Henry Lee of Virginia. His number, “The Lees of Old Virginia,” is a real showstopper!

As Edward Rutledge of South Carolina, Jeremy Rill delivers a rafter-rattling interpretation of “Molasses to Rum.”

Brian Merz-Hutchinson is superb as John Dickenson leading the conservative faction of Congress in “Cool,Cool,Conservative Men.”

Wes Munsil gives us a portrait of Benjamin Franklin with a bawdy wit and beguiling charm that enchants.

“Momma, Look Sharp” closes the curtain on Act One with a tear in the eye for the fallen soldiers of the Revolution.

Jack Cordray Griffin’s tenor as the Courier, is heart-breaking and haunting.

The ear-pleasing score moves from whimsical to mournful to rousing as we look at such diverse questions as which bird should represent the nation, the debate about slavery and finally the signing of the Declaration itself.

Posted by David Marlowe Theatre Reviews at 10:26 AM No comments:

CAT ON A HOT TIN ROOF 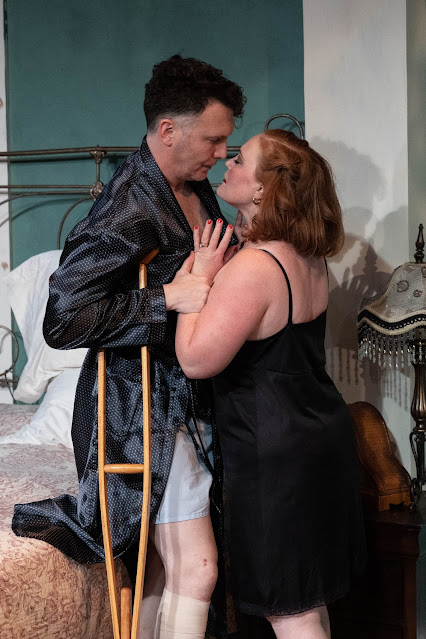 As the Pollitt family gathers to celebrate a patriarch’s big birthday in the sweltering Mississippi heat, sexual tensions explode, and hidden agendas are unveiled.

“Cat on a Hot Tin Roof” is based upon one of Tennessee Williams’ one-act plays called “Three Players of a Summer Game.” It won the Pulitzer Prize for Drama in 1955, and of all his plays, Williams always considered “Cat” to be his favorite.

The adaptation from stage to screen in 1958, which starred Paul Newman, Elizabeth Taylor, and Burl Ives, was nominated for a number of Academy Awards. Williams was disappointed in the screen adaptation which the Hays Code censored, diluting the play’s critique of sexism and homophobia. In short, the ‘mendacity’ Williams was unveiling in the play was diminished in the screenplay.

Kelly Uhlenhopp is on fire as Brick’s glamorous, sultry and sexually frustrated wife, Maggie, ‘the cat.’ In this reviewer’s not so humble opinion, this actor’s smoldering performance is far superior to that of Elizabeth Taylor’s in the film.

Jan Cleveland turns in her best work to date as Big Mama. This actor’s dramatic work in Act Three is powerful.

Progressively and intentionally threadbare after each intermission, Matthew S. Crane’s scenic design gives us the dissolution of the Pollit family’s façade in visual terms.

A family unravels on one hot Mississippi night.

Posted by David Marlowe Theatre Reviews at 10:18 PM No comments: 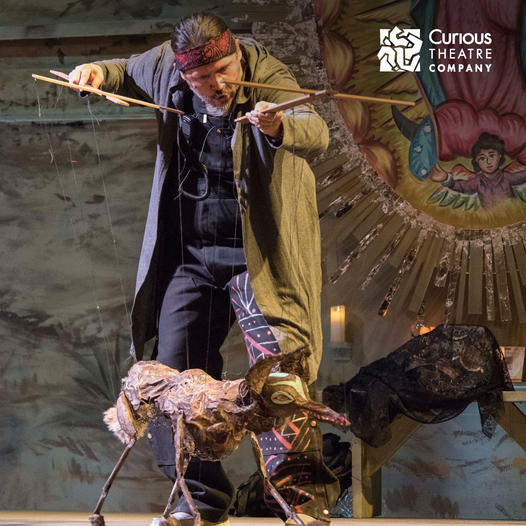 Hat’s off to director Dee Covington and her cast and crew for their compassionate and creative opus, “Refuge.” Curious Theatre is once again helping with humanitarian awareness. This time it’s all about what’s going on regarding the men and women who undertake a formidable migratory journey to cross borders to find a Life worth living.

The play is about a Honduran girl (Satya Jnani Chavez) who journeys across the U.S. -Mexican border to find her mother who has made this journey years before, and now lives in the U.S.

Due to the restrictions of the pandemic, “Refuge” has been a couple of years in the making.

The show is an eye, ear, and heart-opener that’s incredibly innovative in its use of puppetry, bilingual storytelling and music.

The script, co-created by Satya Jnani Chavez and Andrew Rosendorf, intends that when one character speaks in Spanish and the other responds in English (and vice versa), playgoers who speak only one of those languages will understand what is being communicated. If momentarily the meaning is lost, the audio/visual context of the staged situation assists.

The other fine actors were new to this reviewer:  Lisa Hori-Garcia (Steph/Puppeteer) and Josue Miranda (Puppeteer.)

Markas Henry’s superb scenic design has Our Lady of Guadalupe overlooking the action, surrounded by candles. His set also features cacti made from barbed wire as well as Day of the Dead skulls featured on both walls flanking the stage.

Richard Devin’s lighting design is the professional quality that the Denver/Boulder audience has come to expect of him.

A dog, a wolf and a rattlesnake are all represented by Adolfo Romero’s magnificent puppetry/marionettes.

With this production of “Refuge” Curious Theatre gives us another opus with social conscience that’s heartfelt indeed.

Posted by David Marlowe Theatre Reviews at 1:28 PM No comments: