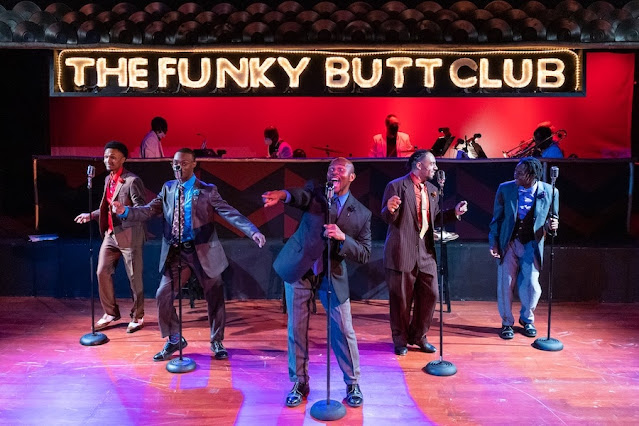 RUN TO GET TICKETS FOR “FIVE GUYS NAMED MOE,” AND  LET THE GOOD TIMES ROLL!!!

Vintage Theatre’s exhilarating production of “Five Guys Named Moe,” is the perfect antidote for the depression brought on by the five o’clock news, the pandemic and the political state of the world.

This revue showcases the work of American jazz saxophonist, band leader and composer, Louis Jordan.  In the 1940s and early 50s, Jordan’s Rhythm and Blues classics paved the way for what would soon be known as rock n’ roll.

Known as “the King of the Jukebox,” just a few of the twenty some Louis Jordan songs you'll fall in love with in this astonishing ‘juke box musical’ are: “Let the Good Times Roll,” “Choo Choo Ch’Boogie,”  “Caldonia,” and “Ain’t Nobody Here But Us Chickens.” By the time this talented ensemble gets to “Is You Is, Or is You Ain’t My Baby?,” your bones will be movin’ around in your seat so much, you may just be tempted to get up and start boogeyin’ in the aisles.

AS the story goes our hero Nomax (Micah Lawrence), is up drinking and trying unsuccessfully to reach his paramour by phone in the wee hours of the morning. Nomax falls deeper into depression until suddenly out of his radio appear: Big Moe (Michael Batemen), Eat Moe(Josiah Peters), Little Moe(Ronald McQueen), Four-Eyed Moe(Jalen Gregory) and No Moe(Kenyan James Bernard.) They all have ideas for what will make him succeed better with his girlfriend…and with life in general. Every one of these actors is a brilliant singer/dancer!!!

Christopher Page-Sanders unleashes a dazzling display of choreography the likes of which we have not seen in ages! Page-Sanders also co-directs the show with Denver favorite Lee Ann Scherlong! How does it get any better than that?

A tip of the hat to Dr. Michael Williams, who is not only responsible for the excellent music direction but produces some virtuosic tickling of the keys as well.

Five Guys Named Moe won Olivier Awards for Best Entertainment and Best Choreographer in 1991 and was nominated for Tony Awards for Best Musical and Best Book of a Musical the following year.

A musical featuring the works of jazz legend Louis Jordan.

Posted by David Marlowe Theatre Reviews at 9:57 PM No comments: