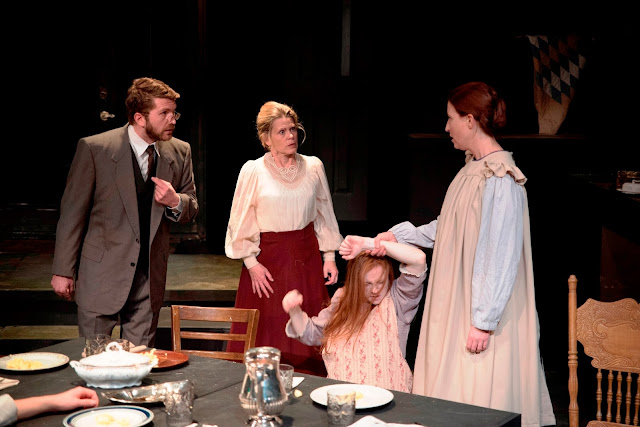 William Gibson’s “The Miracle Worker,” is currently onstage at The John Hand Theater on Lowry.
The story of Annie Sullivan’s work with the tantrum-throwing Helen Keller is a perennial favorite.
Thanks to Peter J. Hughes’ directorial gift, the core of the play is presented with visceral power!
Hannah Ford’s portrayal of the young Helen Keller is outstanding.
Julie Kaye Wolf’s dynamic performance in the role of Annie Sullivan is most memorable.
Seth Palmer Harris delivers a Captain Keller that makes us wish he were cast in serious dramatic roles much more often.
Linda Williams is perfect casting in the role of Helen’s mother, Kate.
Steve Tangedal’s lighting design is remarkable.
Rick Reid’s sound design excels.
One sees what director Peter J. Hughes is attempting here and wishes that the supporting cast could keep up with the actors cast in the roles of the four central characters.
A little slow getting up steam, the production soon fires on all emotional cylinders.
Also …expecting the usual curtain speech at this theater - and not getting one -  the audience on the night this critic was in attendance took a while to shut up.
You may have to say: “SHHHH!”  I did.
Worth a peek.
marlowes' musings


Posted by David Marlowe Theatre Reviews at 2:48 PM No comments: