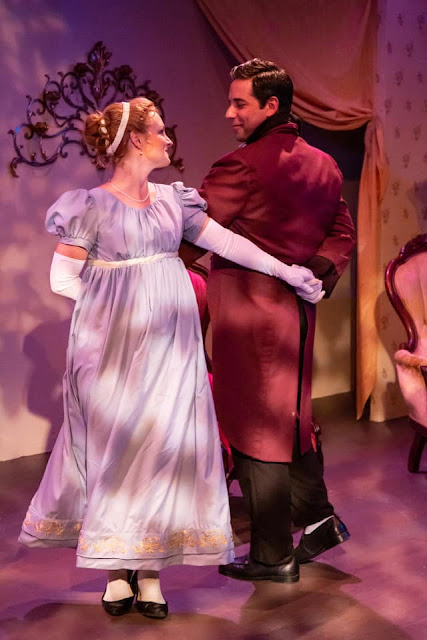 Sara Risner is luminous as EMMA in this romantic comedy by Rachel Atkins, which is based upon the novel by Jane Austen. Whether her character’s advising those around her on social manners or playing and singing at the piano, one can simply not take his eyes off her.
One can always depend upon director Craig A. Bond’s eye for impeccable casting.
Damon Guerrasio is as amusing as Mr. Elton as Victoria Pace is irritating as his wife. Ms. Pace leaves one and all breathless as she steals a number of scenes just by being the most off-putting character in memory.
Stephen Krusoe anchors the piece with a solid portrayal of Mr. Knightly.
Bethany Luhrs is a total delight as Emma's  naive young friend, Harriet Smith.
It’s a joy to see Wade Livingston onstage once again as Mr. Woodhouse, Emma’s father.
Chip Winn Wells adds much to the proceedings as the aged mother of Miss Bates, a winning Christine Kahane.
Director Bond has also created an eye-pleasing set which manages to give us the illusion that the intimate Bond-Trimble theatre contains a sprawling playing space. Even though it's not. Bond’s design allows for a fluid progression of scenes that does not require the constant black-outs less talented directors might have chosen. As a result, the show moves at a steady clip and the audience remains engaged throughout. The set is beautifully appointed with antique furniture and art work of the era.
Susan Rahmsdorff-Terry provides us with elegant costuming for the cast. The ladies’ frocks, especially those designed for Ms.Risner, dazzle.
Rick Reid’s sound design embellishes the proceedings with the sounds of the horses and carriages arriving and departing.

Posted by David Marlowe Theatre Reviews at 9:15 AM No comments: 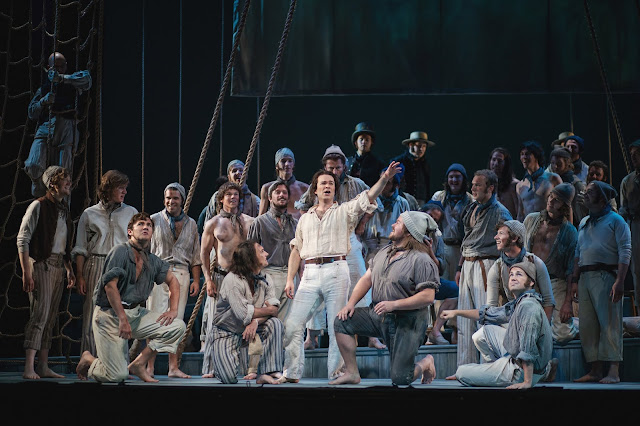 Central City Opera’s current production of Benjamin Britten’s maritime masterpiece, BILLY BUDD, blows the roof off the opera house! It is in all ways exceptional!
Director Ken Cazan must receive the highest praise possible from this reviewer’s desk. His impeccable casting and attention to detail, as well as his honoring of Britten’s stunning composition and E.M. Forester’s and Eric Crozier’s brilliant libretto, is simply the highest and best imaginable.
The gorgeous Napoleonic period costumes by Jonathan Knipscher place us right in the middle of the maritime war with France.
The surreal projections done by Sean Cawelti upon the sails of the ship enhance the exceptionally well- designed set created by Takeshi Kata and David Martin Jacques (also the lighting designer) in such a way as to give us as audience the illusion of being aboard a British man o’ war.
It’s a memory piece in which the dying Captain “Starry” Vere, captain of the British war ship, Indomitable, struggles with his guilt about not having saved the indentured sailor, Billy Budd, from execution. The handsome young sailor, beloved by all except the master at arms, John Claggart, was brought up on charges of inciting mutiny that were cruel fabrication. Billy becomes agitated at his inquisition and his emotions cause him to stammer. In his unsuccessful struggle to speak and reject this false accusation, Billy strikes out at Claggart, accidentally killing him.
Vere, a man of principle and philosophy, adheres to the letter of the law and allows Billy to be executed.
Joshua Hopkins’ singing and acting of the part of Billy Budd is sublime.
Daniel Norman's superb tenor delivers the part of Captain Vere from the haunting depths of a troubled conscience.
Kevin Burdette's acting and singing of the heinous master-at-arms, John Claggart, is masterful indeed!
The orchestra in the pit, conducted by Maestro John Baril, is the stuff of dreams.
The choral work of this all-male cast is Powerful beyond words.
Sung in English with English supertitles, the work is easily accessible to one and all.
I grieve for any lover of theatre or opera in Colorado who does not see and hear this wondrous work.

There are only a few performances remaining. Do yourself a favor and run to see it.

For tickets call 303-292-6700 or go online at centralcityopera.orgMarlowe's Musings
Posted by David Marlowe Theatre Reviews at 8:12 AM No comments: 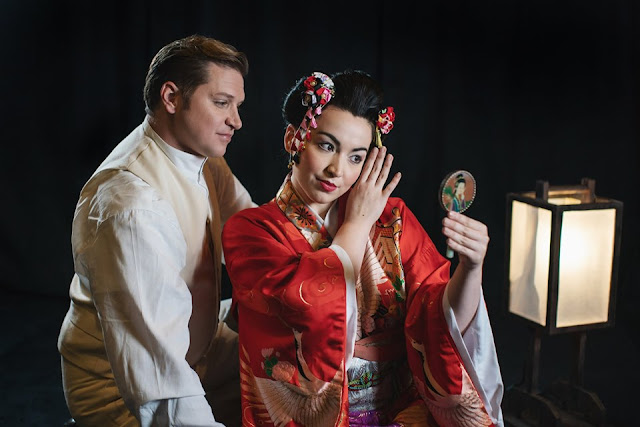 We in Colorado are truly blessed to have easy access to Central City Opera. It’s a consistently excellent opera company performing in the intimate jewel box of an opera house in historic Central City.
Besides being up close and personal with the actors, audience members are regaled with outstanding acoustics. How does it get any better than that?
You owe it to yourself to see and hear this dynamic production of Puccini’s Madama Butterfly now on view at the historic Central City Opera house.

Raquel Gonzalez portrays Cio-Cio San with a youthful ease and allure that’s accompanied by a voice that makes those well-known arias like “Un Bel Di” seem as if one is hearing them for the first time. Ms. Gonzalez’s voice is truly a silken ribbon of auditory champagne throughout. Brava!
Cody Austin’s portrayal of Lieutenant Pinkerton blesses us with one of the more spectacular tenors to have been heard over the last several seasons. And there have been some superb ones!
Troy Cook, whose great baritone we heard in his performances as Gaylord Ravenal in SHOWBOAT and Captain Von Trapp in THE SOUND OF MUSIC, delivers an outstanding Sharpless.

Mezzo Annie Rosen’s acting and singing as Suzuki is heart wrenching.
Under the baton of conductor Adam Turner, the playing of Puccini’s glorious score by the Central City Opera orchestra in the pit is scrumptious to the ear.
Once again maestro David Martin Jacques casts his magic spell enhancing the moods with the lighting design.
A stunning traditional reading of this emotionally moving work, the superfluous imaginings of the demise of Cio-Cio San’s father preceding the play in the 2010 production have been scrapped. This present director, Alison Moritz, focuses on the essence of the libretto with an eye to the influence of social change. She presents us with individuals caught up in the uncertainty of the moment in which Japan opened her doors to the West.In the previous decades only a few Dutch merchants had been allowed entrance into her ports. One of the ways in which Director Moritz summons this idea in visual terms is by having her scenic designer, Dany Lyne, present a number of scenes through a bamboo scrim or curtain.
This is Great Art that is unmissable for anyone loving Puccini. And who doesn’t?
So go and support the most consistently excellent opera company in Colorado. What could be better than driving up into the fresh mountain air and all that gorgeous Colorado scenery to listen to one of the greatest examples of Grand Opera in the repertoire?

p.s. and don’t forget… The regional premier of Benjamin Britten’s maritime masterpiece, BILLY BUDD, opens next week at the opera house in Central City. This is a once in a lifetime chance to see and hear this swashbuckling work based upon Herman Melville’s masterpiece.

For tickets call the box office at 303-292-6700 or go online at centralcityopera.org
Posted by David Marlowe Theatre Reviews at 10:22 AM No comments: 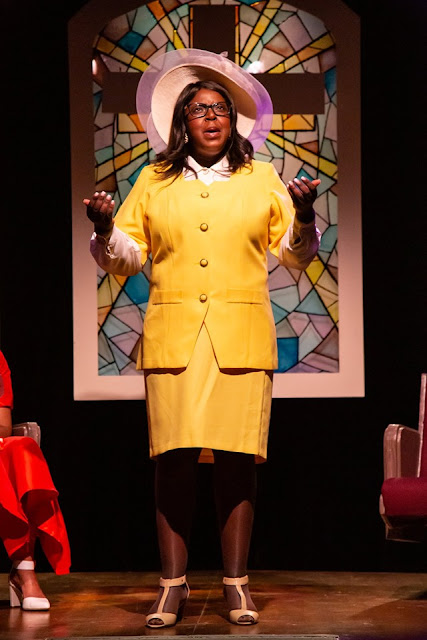 In Vintage Theatre’s production of Regina Taylor’s CROWNS, based upon the novel by Michael Cunningham and Craig Marberry, a young black woman takes a trip to the South to spend time with her aunt.
CROWNS is a gospel musical in which hats become a metaphor for just about every conceivable occasion. There are special hats for baptisms, weddings and funerals. There are nods to hats recalling the days of African rituals and of the time of slavery as well. Hats even figure into the memories of Biblical times.  It’s a musical that celebrates black history and identity.
Betty Hart, who directed last year’s musical hit, “Lady Day at the Emerson’s Bar and Grill,” provides deft direction for playwright Taylor’s insightful play.

The music direction by Trent Hines is his usual professional work.
Christopher Page Sanders’ choreography – and the dancing thereof – is a delight throughout.
In Director Hart's casting of this ensemble  there is no weak link. The cast includes Michaela Murray(Yolanda),Mary Louise Lee(Velma),Rajdulari(Mother Shaw),Jasmine Jackson(Mabel),Sonsharae Tull(Wanda), Adrienne Martin-Fullwood(Jeanette) and Michael Peters(Man). The vocals performed by each and every one of these very talented actors are ear-pleasing indeed.
Phil Cope’s scenic design gives us the beautifully appointed interior of a southern Baptist church, complete with gorgeous stained glass windows illuminated by Kevin Taylor’s excellent lighting design.
The Sunday frocks created for these ladies by costume designer Erika Daun are eye-popping. Likewise, Milliner Sarah Havens has created a stage full of hats that are works of art all unto themselves. Truth be told, Ms. Daun and Ms. Havens give the show the eye-pleasing allure of a fashion show.
Playwright Taylor has an impressive body of work that has garnered four Washington D.C. Helen Hayes awards as well as a Golden Globe, an NAACP Image Award and two Emmy nominations.Marlowe's Musings

Posted by David Marlowe Theatre Reviews at 11:29 AM No comments: