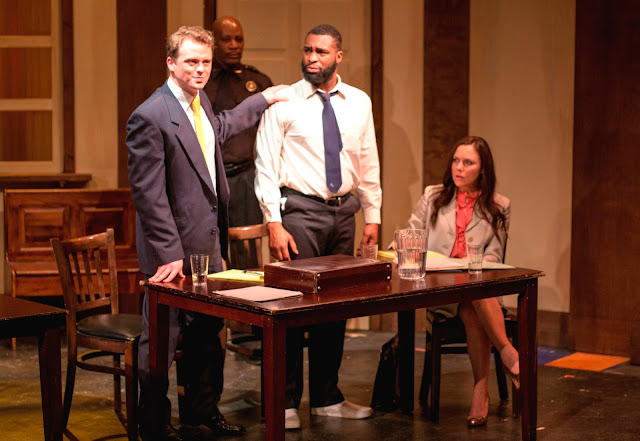 Rupert Holmes’ stage adaptation of John Grisham’s first novel, “A Time To Kill,” is a searing thriller of a court room drama.
Grisham, who has written dozens of novels, wrote “A Time To Kill” before he penned “The Firm” and “The Pelican Brief.”
Growing up in Mississippi, he worked as a lawyer and was a member of the House of Representatives for that state. With his background it’s no surprise that the play is chock full of fascinating southern characters as well as a smoldering racial tension that bristles throughout.
When two red neck boys are brought to trial after having shattered the life of a 10 year old black girl, the stage is set for a confrontation of bigotry and rage as the girl’s father seeks vengeance for their heinous act.
Esteemed director Bernie Cardell has assembled a superb cast that delivers a gripping evening of theatre that rivets.
Robert Lee Hardy portrays the father of the victim with smoldering rage.
As Jake Brigance, the lawyer for the defense, Drew Hirschboeck gives an engaging and memorable portrayal. His nuanced closing statement to the jury will touch you deeply.
Perry Lewis is outstanding in his performance as the prosecuting attorney, Rufus Buckley.
Miranda Byers charms as a precocious intern who assists Brigance.
Linda Suttle turns in her best performance to date as Judge Olga Noose.
Cris Davenport , Emily Tuckman and Claude Diener make the supporting cast shine.
The realistic courtroom set, created by Eric R. Perez is enhanced by Jeremiah Miller’s excellent lighting design. Luke Rahmsdorff-Terry’s effective sound design bridges the scenes with gospel and blues.
Marlowe's Musings

Posted by David Marlowe Theatre Reviews at 4:07 PM No comments: 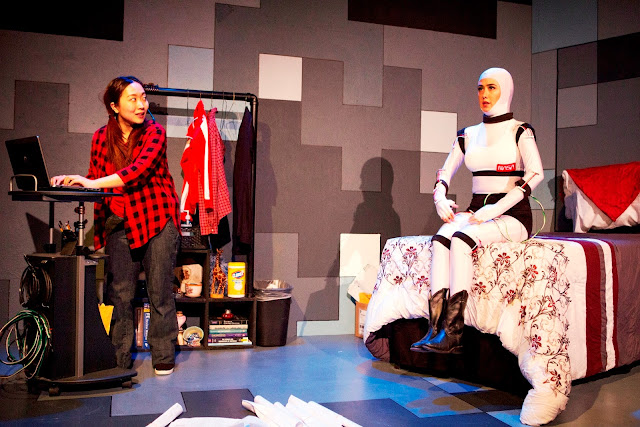 Directed with style by Mark Pergola, The Intelligent Design of Jenny Chow is the story of a cyber-genius who has OCD and is also afflicted with Agoraphobia. Adopted in infancy from China, Jennifer Marcus longs to meet her birth mother. Since she’s afraid to step outside her house she creates a robot to travel to her birth place. Playwright Mark Rollins’ script was a finalist for the Pulitzer Prize in 2006.
Director Pergola has cast Min Kyung Kim as Jennifer Marcus. Making her Vintage Theatre and Denver debut, this actor delivers a passionate reading of a genius’s need to get ‘out of the box.”
Emily Gerhard’s sparkling performance as a robotic alter ego invests the show with humor and warmth.
Andrew Uhlenhopp’s comic performance in a number of supporting roles provides a light-hearted punctuation to the proceedings. His amorous Mormon missionary is especially memorable.
Margaret Norwood portrays a no-nonsense mother with a penchant for tough love wishing her daughter could open the door to her own life.
Andy Anderson portrays Mr. Marcus with a gentle, open-hearted presence.
Erik Thurston’s debut upon the Vintage Theatre stage is delightful as Jenny Marcus’s pizza delivery boy friend.
The show is enhanced greatly by a cleverly created set by Cherly Brodzinsky and an evocative and under-stated sound design by Ren Manley.
Marlowe's Musings

Posted by David Marlowe Theatre Reviews at 11:37 AM No comments: