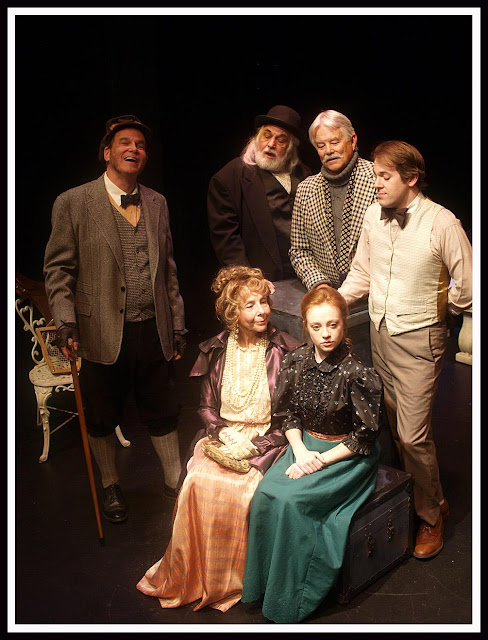 The cast of Mrs. Warren's Profession

George Bernard Shaw’s classic, ‘Mrs. Warren’s Profession” is currently being produced by Germinal Stage Denver at The John Hand Theatre on Lowry. The Pulitzer Prize winner’s play was banned from production for nearly a decade due to its candid addressing of issues such as prostitution and incest during the Victorian era.
Director Laura Cuetara’s no frills spare production design allows her to cut to the chase with ease. Her pacing comes in at a bright clip and her cast is brilliant to a woman/man. Hannah Lee Ford(Marlowe Award for her performance as Helen Keller in THE MIRACLE WORKER) is luminous as Mrs.Warren’s daughter, Vivie.
Carol Bloom gives a nuanced performance that’s outstanding  in the role of Kitty Warren.        As Sir George Crofts, the man you love to hate, Stephen R. Kramer, turns in one of his most studied and grittiest performances to date.
Reverend Samuel Gardner is played with gusto by longtime Denver favorite, Dan Hiester.  Greg Palmer gives Frank Gardner, the Rev's son,  just the right degree of scheming youthful malice to accompany that of Sir George Crofts’ verbal and physical abuse of Vivie. Gary Leigh Webster’s character, Praed (it's only missing the 'y') effectively shows us the harmless 'righteous' in society who go about their lives oblivious to, or in blind allowance of what they might otherwise be able to change…and don’t.
Ms. Cuetera's production is aided in no small part by the costume design of Sallie Diamond, which is, as usual, spot on!
One can’t help but think that Shaw would love this production.  What playwright wouldn’t when his polemic is put forth with such clarity and his words so clearly spoken.
This is one of the greatest feminist plays ever written, and it deserves your attendance. With the current disrespect for women that this administration has fostered we could use a lot more playwrights, who, like Shaw, point out the inherent flaws in a society that limits women’s rights, and then degrades them as second class citizens.

It provides the kind of musical theatre magic that audiences of every age find irresistible.
MAMMA MIA is the story of Sophie Sheridan, a young woman, who's about to get married to a young man named Sky (an amiable and animated Chas Lederer.) There's only one problem. Sophie's been raised on this Greek island by a single Mom, and doesn't know who her father is. In an attempt to discover the man who will walk her down the aisle, she and her girl friends peek into her mamma's diary from the time that she (Donna) was dating twenty years earlier. Since there were three men, and thus three possibilities, Sophie invites all three to the wedding. All of this is unknown to Donna, who is already on overwhelm due to the wedding preparations.
The cast is full of triple threat actors.
Tracy Warren plays Sophie's mamma,Donna, the role played by Meryl Streep in the movie. Nuanced and luminous, Ms. Warren's performance in the title role is to die for. Her triple threat musical theatre talents are such that one simply can't take his eyes off her. Her vocals soar!
Christy Oberndorf is enchanting as Sophia. Ms. Oberndorf is a gifted actor with a gorgeous soprano.
Donna's friends,Rosie and Tanya are played by Joanie Brosseau-Rubald and Alicia K. Meyers respectfully. Ms. Brosseau-Rubald is deliciously funny singing "Take a Chance on Me" to Scott Beyette as Bill Austin five minutes before the bride comes down the aisle. The scene is hilariously acted and choreographed to be a deliriously funny and intentionally spastic flirtation.
Ms. Meyers, who also co-directs and co-choreographs, is especially funny in the number, "Does Your Mother Know?"
Bob Hoppe, the paternal candidate who, once nicknamed Head Banger, and later wound up working for the Bank of England,delivers a great performance singing "Our Last Summer."
Scott Beyette delivers a solid, down-to earth Swedish sailor and travel writer in the role of Bill Anderson. Beyette's duet with Sophie, "The Name of the Game" is especially memorable.
Scott Severtson plays the third paternal candidate, architect Sam Carmichael. Severtson has played everything from Gaston in BEAUTY AND THE BEAST to the Pharaoh in JOSEPH AND THE AMAZING TECHNICOLOR DREAMCOAT. This actor's singing of "S.O.S.", his duet with Ms. Warren, and "Knowing Me, Knowing You," are two of the most heart opening songs of the evening.
Alejandro Roldan is a hilarious Pepper flirting with Tanya(Ms. Meyers) in "Does Your Mama Know?"
Linda Morken's costume design is of the eye-popping quality for which she is renowned. Those disco costumes from the seventies sparkle and shimmer to perfection.Amy Campion's scenic design gives us the exterior and interior of the taverna as well as a glorious Greek beach scene.
The surround sound effect in Wayne Kennedy’s audio design at the top of Act Two adds a wonderful dimensionality to the sonic dreamscape in Sophie's nightmare,"Under Attack," in which she worries if all this will end well.
Brett Maughan’s lighting design in that same sequence gives us a dazzling display of swirling colors that enhances the surreal moment.
You can expect to hear all of your favorite ABBA hits gloriously sung by all your BDT Stage favorites as well as played to perfection by the BDT Stage band.
Award-winning music director Neal Dunfee conducts. The show is co-directed and co-choreographed by Alicia K. Meyers and Matthew D. Peters. (They're the ones responsible for such hits as BEAUTY AND THE BEAST and THE LITTLE MERMAID.)Other faces you may recognize in this great ensemble are:McKayla Marso McDonough, Danielle Scheib, Lillian Buonocore, Sarah Huckabee, Jacob Villareal, Brian Cronan, Leo Battle, Cory Michael Klements, Melissa Morris and Tracey Dennig.

Music and Lyrics for Mamma Mia are by Benny Andersson and Bjorn Ulvaeus (and some songs with Stig Anderson.) The book is by Catherine Johnson. (It was originally conceived by Judy Craymer.) Additional material and arrangements are by Martin Koch.


RUN TO GET TICKETS!

For tickets call 303-449-6000 or go online to BDTSTAGE.COMMarlowe's Musings
Posted by David Marlowe Theatre Reviews at 3:40 PM No comments: 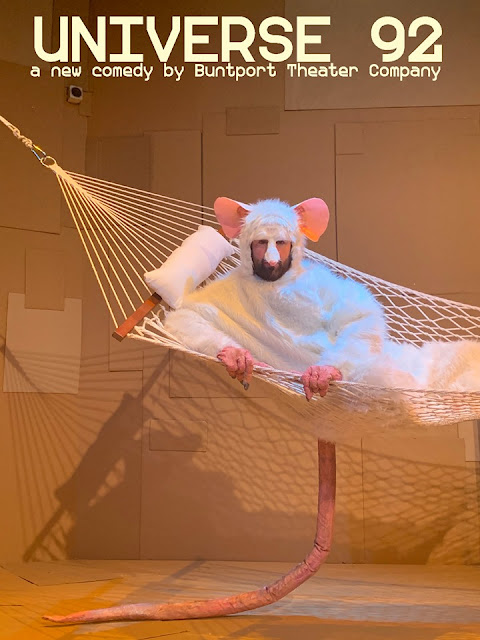 In the Chinese Astrological Calendar next year is the Year of the Rat. We have Buntport Theatre to thank for giving us an early preview and a chance to see 2020 through the lens of their new and original play, UNIVERSE 92.
In this work a rodent is observed by three animal behaviorists, who record the animal’s every twitch.
Brian Colonna gives a luminous performance as Rat. In the paws of a less talented actor the role might have been cheesier.
The three behavioral scientists are played by the other three comic geniuses over at Buntport: Erin Rollman (Dr. Lorelei MacGuire,) Erik Edborg, (Dr. Frank Calhan) and Hannah Duggan (Pamela Hamilton.)
It’s a bit of a spin on 1984 as in this production Rat sorta kinda maybe has one Big Brother and two Big Sisters who watch over him from the lofty heights of their scientific perch in order to observe his movements and record them in their analytic research.
The celery brought in to feed the rat at the performance at which this reviewer was present was just not enough nourishment for a rat that size.  You may, as this reviewer did, feel that the rat could have probably used a few more snacks. If one were to criticize the production at all, he might say that there was little realism in the aromatic sensing of the rat by us as audience. (Perhaps the crew cleans the rat cage between performances.)
There is a wonderfully creative use of cardboard for the set and for the bottom of the rat cage! (The newspaper used for sanitary purposes seemed to be especially absorbent and may explain the lack of rat odor. One can only imagine that they must be old reviews from the Denver Post and/or The Thrifty Nickel.)
Except for the fact that the rat is made to watch sitcoms on television while lying in his hammock, he/it is treated mostly humanely throughout.  Making a rat watch television and then critique it with however many stars makes one aware of the perils of critics writing reviews from the couch. But I digress.
True, the rat is lazy, but it’s always being watched just as Orwell puts forth in 1984. It’s not being given any incentive to find work or even to exercise.
One feels sad for a rat being forced to lie in a hammock doing nothing for all its life except self-pleasuring and judging new contraptions – presumably from Amazon- that are introduced into its world by self-adulating scientists who misidentify and misapply the tried and true methodology of animal research.
At one point in the production a robotic vacuum cleaner – “the sad Roomba” – is introduced into the scenario. Perhaps this may have been a bit ‘de trop’ since the random patterning of its (the roomba’s) search for debris seemed mostly unsuccessful.
UNIVERSE 92 is silly and just plain fun.
Scamper to get tickets.

Posted by David Marlowe Theatre Reviews at 2:21 PM No comments: