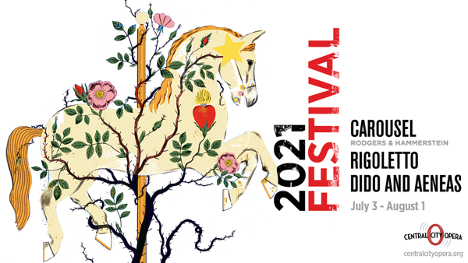 Make History and discover unforgettable performances with Central City Opera in the Gardens!

The 2021 Central City Opera Summer Festival is happening this year at Hudson Gardens.

In a recent phone call, Pat Pearce, Central City Opera’s General/Artistic Director, spoke about the wonderful opportunity we have in getting to see and hear the 2021 Central City Opera Summer Festival at the Hudson Gardens on South Santa Fe Drive in Littleton.

Most people are aware that Hudson Gardens will usually seat 3200 people.  At present only 500 will be allowed inside the Gardens for the operas due to Covid. Hopefully, as restrictions ease, more seats might become available.

The shows run 90 to 110 minutes with no intermission to make sure that people do not gather in large groups.

Pearce said that “National Jewish Hospital is helping with instructing the management at the Gardens in how best to keep everyone safe. There will be social distancing and masking.”

Pearce went on to say, “the orchestra will be situated behind the stage, socially distanced and behind plexiglass.

From staging to seating this outdoor production, we had to rethink everything about how to safely present the show. Everyone onstage will be vaccinated.

They’re setting up chairs for Section A.  Sections B and C will be basically on lawn with blanket or patrons will have brought their own lawn chairs.

They have been doing everything possible to keep musicians, singers and audience safe with regard to transmission via aerosol.  A whole protocol has been put into place. There will be “a moat” between the audience and the stage.”

The instruments and singers will be amplified this year. That is to say they will be ‘miked’ due to being outside.

Giuseppe Verdi’s “Rigoletto” will be sung in Italian, with surtitles embedded above the actors/singers, atop the physicality of the set.

Pearce gave high praise to the actors and directors who will be involved in this history-making summer festival.

In speaking of baritone Alexey Bogdanov, who will portray Rigoletto, Pearce said, “Over the years I’ve gotten to hear a lot of people sing the role. It’s been a tour de force for the great baritones ever since Verdi wrote it, a century and a half ago. It really allows them to show off. I heard Alexey sing for me in New York at an audition and he was spectacular. He has the kind of instrument that has a lot of color and bite. That’s the kind of thing a singer needs to have in his arsenal for singing Verdi. He also has the look and the swagger.

Alisa Jordheim is Gilda. She’s a wonderful soprano who was in the training program at Central City and also played the sister of the young boy in “The Turn of the Screw.” Petite and beautiful, she’s very talented vocally and a very good actor into the bargain.”

Galeano Salas gets to unleash his great tenor on those spectacular arias Verdi wrote for the Duke of Mantua. John Paul Huckle will portray the assassin, Sparafucile.

It looks like “Rigoletto”’s going to be old home week since the Duke, Gilda and Sparafucile are all past apprentices.

John Baril is the music director/conductor for Rigoletto.

“Rigoletto”’s stage director will be Jose Maria Condemi, who directed Emily Pulley the last time she was here in “Carmen,” as well as directing “Florencia en el Amazonas” for Opera Colorado.  Jose spends a good deal of time at San Francisco Opera Conservatory.

Ken Cazan will direct Carousel. Ken loves this period. He was a great success directing Oklahoma, A Little Night Music and West Side Story. Cazan’s direction of Benjamin Britten’s Billy Budd in 2019 was enormously successful due to his being able to tell the story with a sort of deep clarity.

Anna Christy is Julie Jordan in Carousel. She’s a really great actor as well as singer. Having debuted as Titania in the 2002 production of Benjamin Britten’s “A Midsummer Night’s Dream, she played Emily in “Our Town.” She also starred in the most recent production of “The Ballad of Baby Doe.”

Phyllis Pancella will play Nettie Fowler in “Carousel.” Featured in the casts of “Our Town” and “Rinaldo,” she was also Nerone in Monteverdi’s “The Coronation of Poppea,” as well as the superb Lucretia in the CCO production of Britten’s “Rape of Lucretia.”

This will be Steve LaBrie’s Central City Opera debut as Billy Bigelow in “Carousel.” LaBrie is a young up-and-coming baritone, who also sings Verdi. He had been put on hold for something before Covid, so when this opportunity arose, he was cast.

Jennifer DeDominici portrays Carrie Pipperidge in “Carousel.” She has great presence and can really build a memorable character.

David Jacques designed the set for “Carousel” as well as the lighting. His incredible lighting, which takes a front seat with us, is going to be a lot more challenging and “interesting” with daylight.

In answer to a question about the look of the show, Pearce said,”We have created a unit set with several levels in order to have multiple playing spaces in which to present the shows.

Rigoletto has basically moved in time. It could be contemporary or possibly the 1970s. Something along those lines. Carousel is non-time specific. Here the focus is on clear storytelling using Rodgers’ glorious music to enhance it.”

Don’t forget that “Dido and Aeneas” is being presented in the gardens outside the opera house in Central City this summer. So, everything is outside this year.

The opera company is currently in the process of creating how things will be if there is inclement weather. They’ll be handling things in much the same way as Red Rocks and other outdoor concert venues with regard to when it would be necessary to “call” the show.

Next year will be Central City Opera’s 90th Anniversary.  Pearce promises to let us know as soon as the board makes a solid decision on the operas they’ll be producing then.

The suggested arrival time is at least thirty minutes before showtime so people will have plenty of time to select their seats. Doors will open one hour before the performance.

Free parking is available on a first come, first serve basis, and is only a short walk to the performance area. Limited reserved parking can be purchased for five dollars (based on availability.) ADA parking is also available. Please contact the Box Office for more information.

People will be allowed to bring food and non-alcoholic beverages into the venue.

And don’t forget that Hudson Gardens is located near lots of great restaurants for pre and post-show cocktails and meals.

Posted by David Marlowe Theatre Reviews at 10:45 AM No comments: