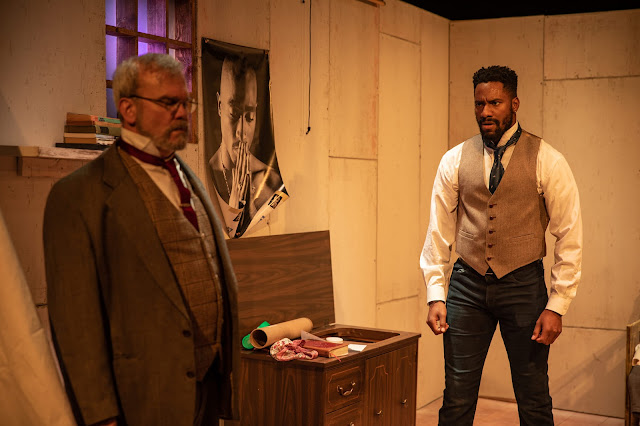 Let me just say at the get-go that Benchmark Theatre’s ELEPHANT is the most important new work to have been seen by this reviewer in memory.

Using a timely truism, Benchmark builds a metaphor for racial bigotry upon the current expression: “elephant in the room.”

Hanging loosely upon the armature of your memories of the play/movie, “The Elephant Man,” the contrasts in this production outweigh the comparisons by far.

The Merrick of this play is not misshapen or disfigured in any way. Indeed, he is a tall, handsome, muscular black man. Articulate and dignified in his speech and demeanor, he is seen to have more knowledge of Shakespeare and the Bible than either the self-aggrandizing Frederick Treves or the publicity-seeking Madge Kendal.

New to this reviewer, Courtney Esser is luminous as the hypocritical socialite Madge Kendal.

Dan O’Neill exhibits the onstage excellence we have come to expect of him as know-it-all Frederick Treves, doctor and intellectual a la side show hawker.

Both Mr. O’Neill and Ms. Esser perform their characters in such a way as to hold up the mirror to the appalling, nightmarish nature of white supremacy regarding the abuse, negligence and exploitation of black people. Their performances illuminate the ignorant ‘unnaturalness’ of those who have sometimes been referred to as “the deplorables.”

You don’t have to be a student of neuro linguistic programming to recall what a shock to the nervous system it is to see the swirl of red and blue lights in the rear-view mirror accompanied by a wailing siren. The nervous system goes on high alert accompanied by a clenched stomach. Why? No one likes to get a speeding ticket. And what if you had a glass of wine with dinner? Additional stress.

Now imagine the exponentialized stress a black man or woman experiences with the lights and siren, when the possibility of death hangs in the balance.

It is this degree of awareness that ELEPHANT drives home in multiple ways; not the least of which is the excellence of its sound (Marc Stith) and lighting designs.

Elephant asks us not only to observe these atrocities, but to feel them, and to engage in creating change.

This is a rich work that makes a reviewer hold back from unleashing spoilers and describing this new work in too great of detail. You deserve the freedom to experience it for yourself.

ELEPHANT is powerful social commentary and what this reviewer regards as Great Art. It was an honor to see it.

Benchmark Theatre is located at 1560 Teller Street in Lakewood. For tickets call 303-519-9059 or go online at www.benchmarktheatre.com

Posted by David Marlowe Theatre Reviews at 8:53 AM No comments: 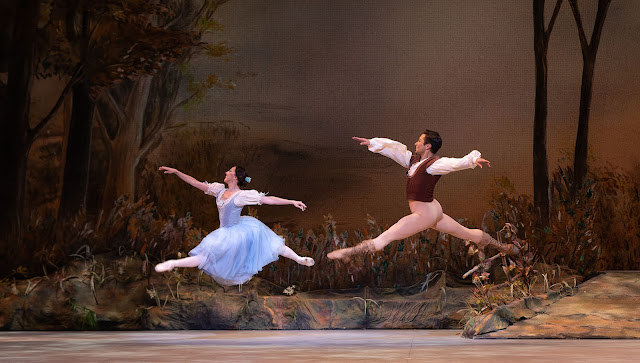 Colorado Ballet’s production of Giselle brings world class ballet back to the stage at The Ellie Caulkins Opera House.

The electricity on opening night was palpable. The audience was ecstatic simply to be back at the Ellie for the first time in eighteen months.

In short order we were treated to the exquisite dancing of this beloved company as well as to Adolphe Adam’s melodious score, brought to glorious life by the Colorado Ballet Orchestra under the baton of conductor Adam Flatt.

First night principal roles played by Dana Benton, Yosvani Ramos and Christopher Moulton were all superb. A tip of the hat to Gregory Gonzales, who plays the Duke of Courtland.

Ms. Benton’s dancing of the title character showed her to be a ballerina of grace and beauty as well as an artist of meticulous technique. Mr. Ramos exhibited a vital and elegant athleticism in the role of Count Albrecht. Christopher Moulton brought a strong, bold passion to his performance as Hilarion.

As Myrta, Queen of the Willis, Jennifer Grace
stunned with her virtuosic elegance and expressiveness.

The corps de ballet danced with a synchronous precision which was mesmerizing.

The eye-popping costumes and scenic design by Peter Farmer and lighting design by Todd Elmer, greatly enhanced the evening.

The choreography by Jean Coralli and Jules Perrot, as revised by Marius Petipa is wondrous, complex, and some of the most demanding in the repertoire.

Posted by David Marlowe Theatre Reviews at 10:26 PM No comments: 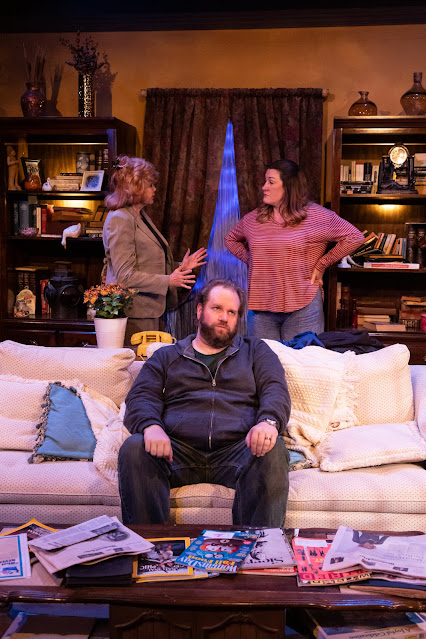 The winner of the 2019 Mystery Suspense Thriller New Play Showcase, Scott Gibson’s CROSS WORDS, is currently on view at Vintage Theatre in Aurora.

The set-up is that married couple Tim and Flora have agreed to take on certain domestic duties for their aging Aunt Rosamunde. In return, the couple stands to inherit not only the house, but a huge sum of money that the old girl has squirreled away in savings.

Beyond that there will be no spoilers.

Gibson’s play is tightly plotted and exceptionally well written.  Filled with dark secrets and unexpected revelations, the playwright has included more twists and turns than you can possibly imagine.

The cast includes the likes of: Molly Turner (Flora) and Luke Rahmsdorff-Terry (Tim), who portray the couple at the center of this maze.  Jan Cleveland plays Clarissa, Aunt Roseamunde’s legal advisor.  Elton Tanega is Emory, a delivery boy.

Go and treat yourself to an evening filled with suspense and great good humor.

The World Premiere of a suspenseful new thriller.

Posted by David Marlowe Theatre Reviews at 7:19 PM No comments: