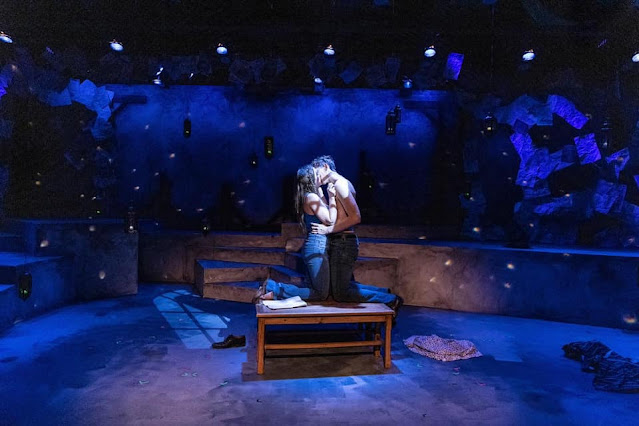 Magnificent both conceptually and in its execution, Vintage Theatres’ production of SHAKESPEARE IN LOVE is NOT TO BE MISSED.

The adaptation of Marc Norman and Tom Stoppard’s screenplay for the stage by Lee Hall is genuine artistry.

The themes of a playwright trying to get over writer’s block and women trying to find their rightful place in the Globe are as prevalent now as then.

Christine Kahane’s direction is studied and astute in every way.

Ben Griffin’s Will is young, masculine and handsome. He’s a regular guy with more substance than some, who are seemingly cast for Hollywood glam.  This actor’s energetic, articulate performance in the central role is golden.

Anne Jenness is luminous as Viola de Lesseps. Amusing in her mustachioed drag, she is gorgeous all in white near final curtain. The sensuous delivery of the lovemaking of Will and Viola at the top of Act Two is visually delicious. Kahane’s direction of this scene is of the highest and best, with regard to relating true tenderness of heart in visual terms.

Hilarious beyond words, Joey Wishnia’s performance is indelible! His high comic take on the role of Queen Elizabeth I is an utter delight!

Mari Gaesair is brilliant in her role as the Nurse. It is thrilling to see this actor onstage again, and one hopes to see her there again soon.

Clint Heyn in Christmas colors with goose turd green leggings creates hilarious suspense with his stuttering prologue as the Chorus.

Andy Seracuse gives a masterly portrayal of Christopher Marlowe. Finishing young Shakespeare’s sentences and giving him the titles for his plays, both the script and the direction give us hints that Shakespeare was piggy-backing the assumed dead Marlowe. (But I digress. It’s up to you to decide whether the Marlovian theory that Christopher Marlowe wrote the plays is true or not.)

Eric Carlson’s Lord Wessex is appropriately narcissistic, unkind, and arrogant. The kind of guy you love to hate!

Ryan Walkoviak’s scenic design flanks the stage with a swirling spiral of pages floating mid-air. Other than that, his minimalist approach allows the Elizabethan and the contemporary time periods to meld and the actors’ performances to really pop.

In like manner the costumes created by Cheryl Falnew, Susan Rahmsdorff-Terry and Kristina Ferraro Johnson create apparel that blends contemporary and Elizabethan styles.

If you don’t have a tear in your eye at this play’s final curtain, you may not have a pulse.

Get thee to the theatre!!!

The exciting play adapted from the Oscar-winning film.

Posted by David Marlowe Theatre Reviews at 8:24 PM No comments: 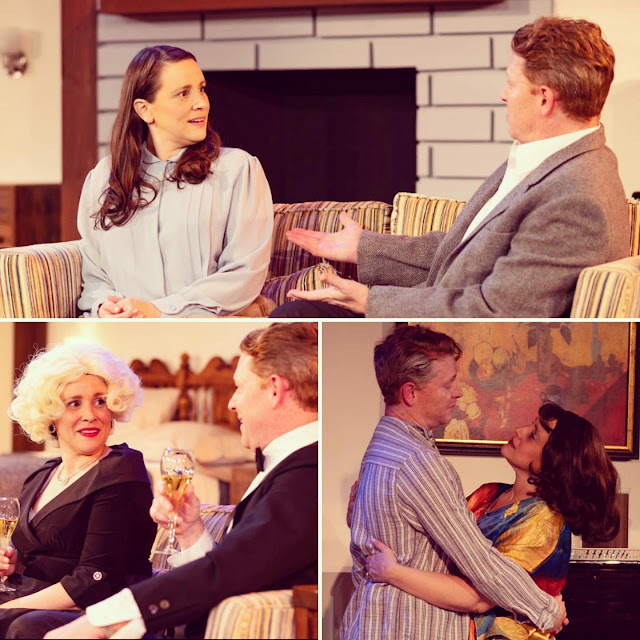 Poignant, funny and ultimately bittersweet, the Cherry Creek Theatre’s production of Same Time Next Year is a thoroughly satisfying production.

Bernard Slade’s play gives us a love affair that begins as a one-night-stand and becomes an annual romantic getaway for a quarter century.

It’s a romantic comedy in which the yearly clandestine rendezvous is framed by societal changes as well as those involving the lovers’ actual families.

Eric Mather’s comic timing in the role of George is impeccable. Long known for his comic genius, this actor has evolved superb dramatic skills as well.  Both he and Lauren Bahlman as Doris, succeed in giving us as audience the illusion of aging minds and bodies as the years progress.

Due to the changing ages of the characters a number of wigs were used for Ms. Bahlman.  Most were excellent. However… one blonde wig in Act One was unfortunately easy to see through, ruining the illusion.

Illuminated by Vance McKenzie’s great lighting design, David J. Castellano’s scenic design is the best use of the Pluss Theatre’s stage in memory.

For tickets go online at cherrycreektheatre.org or call the box office at 303-800-6578

Posted by David Marlowe Theatre Reviews at 4:58 PM No comments:

Colorado Ballet’s production of ROMEO AND JULIET is outstanding in every way.  A tip of the hat to Artistic Director Gil Boggs who has transformed this company into one of World Class status.

Whether you’re a longtime aficionado of the ballet or a ballet virgin, the descriptive choreography by Derek Deane makes this story and all its characters come to life with easy accessibility.

Under the baton of conductor Adam Flatt, the Colorado Ballet orchestra brings out every nuance of the powerfully beautiful music by Sergei Prokofiev.

As Juliet,Dana Benton is a ballerina who dances as if she were a feather on a spring breeze. Her delicate girlish dancing in Act One transforms into one of frenzied strength and determination when fate darkens her world.

Yosvani Ramos dances Romeo, her starry-eyed lover, with youthful abandon and great technique. In the pas de deux in the balcony scene the two lovers practically fly. Their pas de deux in Juliet’s bedroom the morning after their night together exquisitely conveys an ardent love and sheer bliss.

This Romeo has great acting qualities.He’s able to convey the dizziness of first love and strong enough to easily lift and carry his Juliet around the Capulet crypt in agonizing grief.

As Lady Capulet, ballet master Maria Mosina’s fury at the death of Tybalt is consummate artistry of the highest rank. One longs for the days in which this superb ballerina was the leading lady.

Gregory K. Gonzales as the stern overbearing Lord Capulet, provides the superb artistry Denver audiences have come to expect of him over these last decades.

Mercutio’s death scene is enacted with true bravado by Kevin Gael Thomas. His smoothly rising and falling again and again with cheerful abandon provides us with a knockout delivery of his character’s amiable insanity. Unmistakably, we hear a silent “A curse on both your houses” delivered in mime.

Equally compelling is Tybalt’s death scene, in which the brilliant dancing of Jonathan Ramirez creates the jerky antithesis of the death of Mercutio.

The show is staged to perfection by Ivan Gil-Ortega,Sandra Brown and Lorita Travaglia.

Illuminated by the lighting design of Todd Elmer, the scenery and costumes (Roberta de Bagno Guidi) which are courtesy of Pittsburgh Ballet Theatre, are eye-popping!

The crimsons of the dancers’ costumes at the Capulet ball are as unforgettable as the violet of Lady Capulet’s swirling gown.

The caliber of the entire corps de ballet is phenomenal.

Posted by David Marlowe Theatre Reviews at 8:10 AM No comments: