Vanya and Sonia and Masha and Spike
Firehouse Theater Company: 8/29 – 9/26 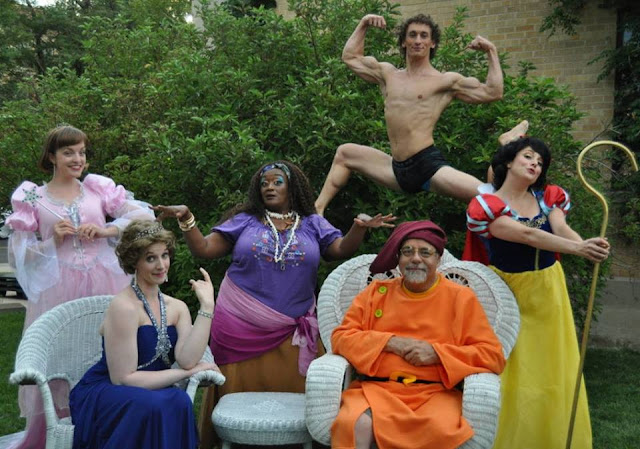 “Vanya and Sonia and Masha and Spike” is now one of my favorite Christopher Durang plays. Everyone should laugh a lot at this Firehouse Theatre production that sends up Chekhov as well as many of his famous characters. You don’t need to be a culture vulture to enjoy the show either. There’s a world of fun in playwright Durang’s weird and wacky play that also includes a psychic maid and a Hollywood muscle boy.
Steven Maestas and Caitlin Conklin perform the roles of the kvetching Vanya and Sonia respectively. It’s a treat having Maestas onstage again as the depressed Vanya. Ms. Conklin conveys Sonia’s angst with all the body language of the martyred and down trodden.
Jennifer Bass portrays Masha,the movie star who visits Vanya and Sonia with her boy toy, Spike. Ms. Bass’s portrayal of Masha is a whirlwind of effusive brio that’s a hoot.
Keegan O’Brien’s Spike, is a muscular lad with a propensity to disrobe (although not completely) and perform acts of Cirque de Soleil-like contortion at  choice moments in the show. O’Brien who recently took second place in the overall physique category at the annual MuscleMania Mile High competition, is also a very fine comic actor.
Lisa Young’s performance in the role of Cassandra is hilarious. Just as in the plays of Aeschylus her character is gifted with psychic abilities for reading the future and cursed with the knowledge that no one will ever believe her.
Near final curtain Vanya agrees to let Nina, a fetching Mollie Horne, read his half-baked play within the play. Spike loses interest and begins to text. This enrages Vanya who unleashes a preachy monologue that one might wish had been shortened in the final edit.
Jeffrey Jesmer’s scenic design is pleasing to the eye and beautifully appointed. The very fine lighting and sound designs have been done by T. Marc Stevens. Deborah Montgomery and Kris Paddock are responsible for the hysterical costume design.
It’s Steven Tangedal’s best direction since the halcyon days of Theatre on Broadway.

For tickets call 303-562-3232 or go online at firehousetheatercompany.comMarlowe's Musings

Posted by David Marlowe Theatre Reviews at 12:20 AM