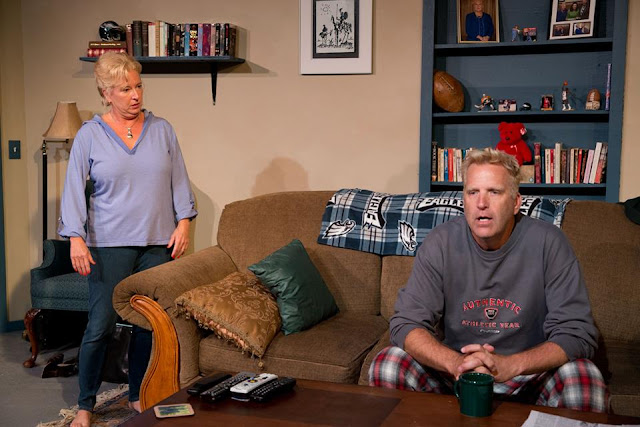 “Any Given Monday” is Vintage Theatre’s eighty-fifth production. It’s a play about a man who’s devastated when his marriage is threatened. Lenny’s wife, Risa has left him for a Walmart-building Lothario with a flashy car, causing him (Lenny) to fall into a low level depression that disallows his even getting dressed in the morning. Over the twenty-four years of his disintegrating marriage Lenny, who is played by a shell-shocked and slack-jawed Robert Kramer, has become something of a hen-pecked wimp. He’s even afraid to put his feet on the coffee table in his own man cave.
Michelle Grimes plays Lenny’s wife, Risa, who bored with Lenny and life in general, seeks to find adventure even if it happens to be in the arms of another man.
Kelly Dwyer is Lenny’s daughter, Sarah. She’s a know-it-all philosophy student who wants to view Daddy as a heroic figure such as Atticus Finch and has a penchant for spewing theory.
A feisty Peter Marullo plays Mickey, Lenny’s slightly on tilt buddy. Micky’s vigilante take on how one maintains a relationship is unique to say the least.
Communication skills and political correctness come into conflict here and whenever the men argue, their eyes are glued to the football game on television causing their dialogue to be punctuated with emotional outbursts directed at the players.
It’s Sam Gilstrap’s directorial debut and delivers lots of laughs that leave us with a broad smile on our faces at final curtain.

Posted by David Marlowe Theatre Reviews at 7:16 AM