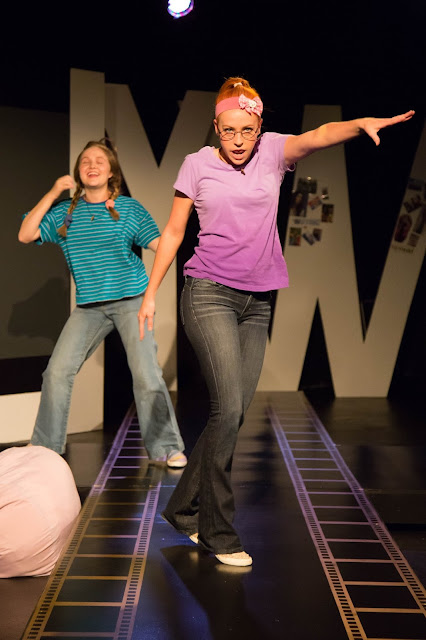 Angela Astle directs this regional premiere of Hillary Bettis’ play.
"American Girls” is a sobering indictment of a permissive society. According to the playwright societal pressures, peer pressures and a distinct lack of parental pressures promote sexual promiscuity.
The societal pressures are expressed wonderfully well by El Armstrong’s glamorous visuals and Joe Von Bokern communicates the ineffectiveness of ecclesiastical pressures by his bland sermonizing as a condescending Pastor Jim.
This modern day morality play features Bethany Richardson (Amanda) and Alexis Robbins (Katie) as a duo of friends brimming with girlish curiosity, raging hormones and a child like naiveté.
Benjamin Cowhick, Paige Larson and Ryan Goold appear in video/voice over segments providing us with the ubiquitous exploitative adults.
Unfortunately the girlish characters, who are coasting along a runway to fame encircled by that famous HOLLYWOOD sign, are as one-dimensional as the pastor who warns them about the dark lonely cave they can expect unless forgiven.
The most cogent message to be found here is the indictment of adults who, prey on children by luring them by ads for ‘auditions’ placed on the Internet.
One wishes that a condensation of the play were Act One so that we could see what the playwright believes Life becomes for American Girls thereafter in Act Two.
Although the play may not be one’s favorite from the standpoint of edge of your seat writing its one that can spur discussion.