With music by John Kander and lyrics by Fred Ebb, this renowned musical is based on John Van Druten’s play, “I am a Camera” which is in turn based upon Christopher Isherwood’s book “Goodbye to Berlin.”
Cliff Bradshaw, an American writer, falls hard for a pretty young cabaret singer named Sally Bowles at the Kit Kat Klub in 1931 Berlin. The Nazis are coming to power.
The Master of Ceremonies who presides over what transpires during Cliff’s stay in Berlin, is a metaphor for the ugly political atmosphere that led to the Holocaust.
The show won eight Tonys in 1967 including those for: Musical, Lead Actor, Lead Actress, Featured Actor, Featured Actress, Original Score, Direction, Choreography, Scenic Design and Costume Design. 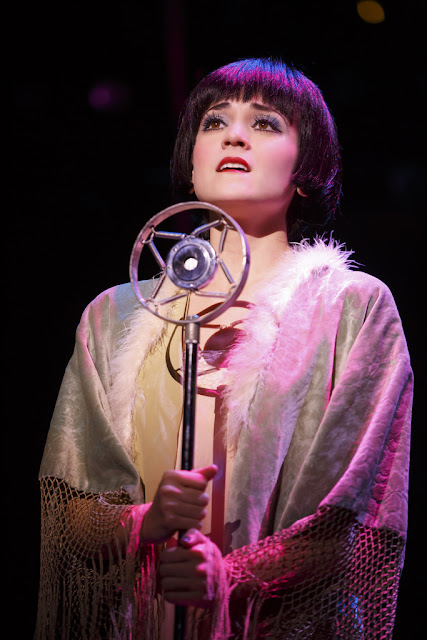 Equal parts adorable gamine and seductive vamp, Andrea Goss is outstanding in the role of Sally Bowles. Ms. Goss is the quintessential Sally. Besides her powerful delivery of the title song, her renditions of “Mein Herr”, “Don’t Tell Mama” and “Maybe This Time” stun. 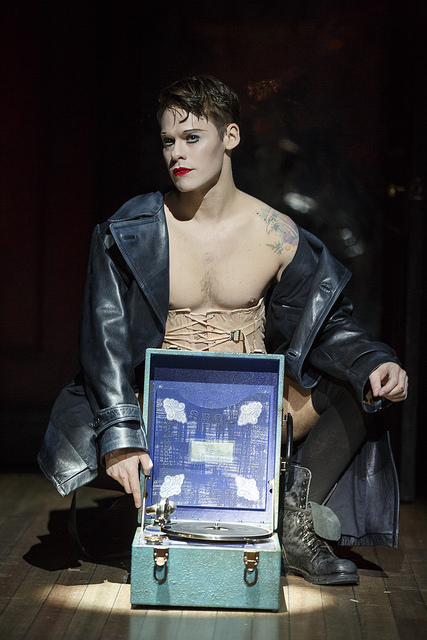 Randy Harrison is definitely the best looking actor to play the Emcee that this reviewer has seen. He has a great physique and a decidedly Aryan look. What he lacks in smarminess he makes up for with an enticing insidiousness and triple threat talent. Mr. Harrison’s performance of “If You Could See Her,” “Money” and “I Don’t Care Much” allows us as audience to feel the growth of the bigotry, cruelty and empty cynicism of Berlin in 1931.
Mary Gordon Murray and Scott Robertson are charming as Fraulein Schneider and Herr Schultz respectively. Ms. Murray’s vocals stun.
There are two spiral stairways that flank the playing space which lead to the orchestra positioned above the stage.
Robert Cookman’s music direction together with Michael Gibson’s orchestrations conspire to elicit music from these musicians that’s intoxicating. 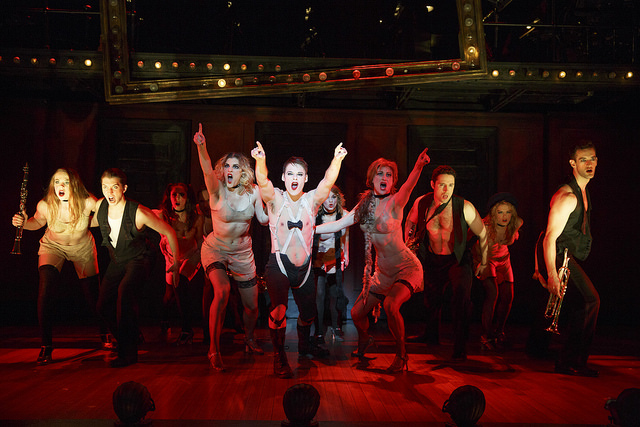 The lighting design is dazzling! At certain points the footlights create garish distortions in the Kit Kat girls’ and boys’ faces reminiscent of those in some of James Ensor’s expressionist paintings.

Roundabout Theatre Company’s CABARET is an electrifying evening that should be seen by anyone who loves theatre.