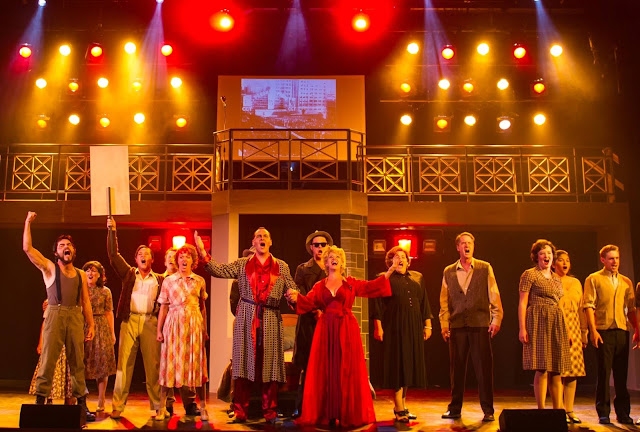 (Photo Credit: Rachel Graham/RDG Photography)
How did we got so lucky to get to see three of Colorado’s finest actors together in EVITA?

With music by Andrew Lloyd Webber and lyrics by Tim Rice, EVITA won six Tony Awards in 1980 including one for Patti LuPone for Best Actress in a Musical.  It was the first British musical to have ever captured the American Tony. Before that Evita had already won the Lawrence Olivier Award for Best Musical and Best Performance in a Musical by Elaine Page in London.
In 1996 Evita became a major Hollywood film starring Madonna and Antonio Banderas.
The musical is based on the life of Eva Peron, the second wife of the president of Argentina, Juan Peron. It follows her from small town hooker to radio personality to first lady of Argentina while presenting us with her eventual power plays backed by the unions, her charity work, and concluding with her death in 1952.
We have director Patrick Sawyer to thank for casting the superb triumvirate of Joanie Brosseau, Markus Warren and Matt Lafontaine to play: Evita, Peron and Che respectively.
Ms. Brosseau has stunned Colorado twice before in this role.  Mr. Lafontaine recently wowed us with his outstanding performance as the Baker in “Into the Woods.” Mr. Warren stunned us with his performance as Cinderella’s Prince in that same Candlelight Playhouse production.
Markus Warren is at the pinnacle of his career as an actor. His vocals are perfection. Warren's renditions of “The Dice are Rolling”, “The Rainbow Tour” and “The Art of the Possible” are indescribably delicious to the ear.
Ms. Brosseau and Mr. Lafontaine knock us out with their duets of “High Flying Adored,” “The Money Kept Rolling In” and “A Waltz for Eva and Che.”
Benjamin Abernathy’s lighting design is a blaze of colorful fireworks that exhilarates.
Shauna Johnson’s scenic design is functional and descriptive without ever becoming ostentatious. It allows the performances to really pop!
The final scene of Act One, in which the unions align with La Peron is one of fiery bravado and triumph that is what one might refer to as "Stupendous!"
The costumes by Debra Faber are eye-poppers. The gorgeous white gown worn by Ms. Brosseau for her appearance on the balcony of the Casa Rosada singing “Don’t Cry for Me, Argentina,” is dazzling!
The menu at Candlelight Dinner Playhouse is exceptional as well. Try the Prime Rib!

The venue is one of the most stunning in the region. If you haven’t been there yet, go discover the magnificence of Candlelight Dinner Playhouse! Marlowe's Musings

Posted by David Marlowe Theatre Reviews at 7:22 AM