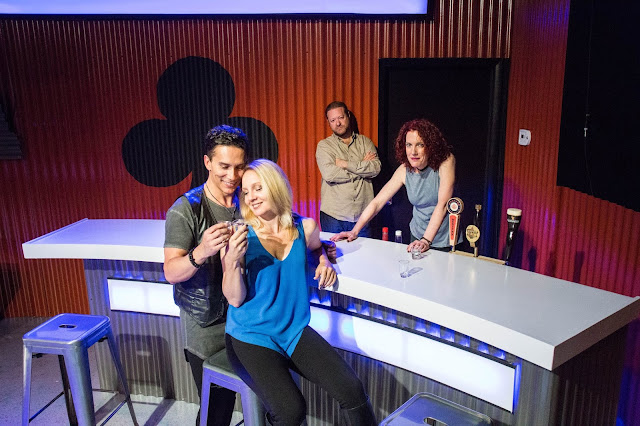 L-R: Kent Randell, Shannan Steele, Robert Michael Sanders and Mary McGroary
Naturally we expect a show to have an edge at The Edge Theatre, and we get it with this musical, "Murder Ballad." In this case it’s less like the sharpness of a razor’s edge than the blunt crack of a baseball bat.

The music direction by Jason Tyler Vaughn is stunning.
The sound design by Tom Quinn and Kenny Storms supports the vocals beautifully.
The lighting by Kevin Taylor enhances the story’s moods.
Director Rick Yaconis has assembled a very fine cast: Shannan Steele, Kent Randell, Robert Michael Sanders and Mary McGroary.
The insidiously cynical presence of Mary McGroary in the role of Narrator is the very essence of desperation and deceit.
Shannan Steele, Kent Randell and Robert Michael Sanders ‘flesh out’ the love triangle that fuels this steamy musical thriller.
With book and lyrics by Julia Jordan and music by Juliana Nash,"Murder Ballad" is inventive, unusual and lends itself perfectly to the intimacy of the Edge Theatre.
Marlowe's Musings