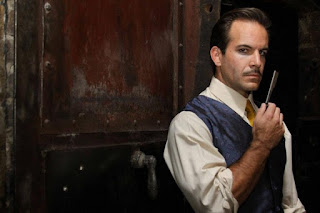 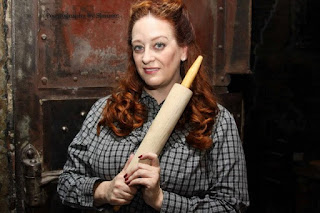 Boni McIntyre
Ignite Theatre’s production of “Sweeney Todd,” now on view at Aurora Fox Arts, has some sterling  performances. Travis Risner and Boni McIntyre do a superb job with the macabre barber and baker at the heart of the show. The pinnacle of their work is the hilariously dark singing of “A Little Priest.”


Sara Closson Metz is a wonder singing “Green Finch and Linnet Bird.” Her singing of the role is utterly enchanting. One hopes to see and hear her soon again upon the Denver stage.
Tim Howard is outstanding in the role of her sailor love, Anthony. Mr. Howard has proven himself time and again as being one of the best young male actors in musical theatre in the Mile High City in such shows as “The Producers” and “A Funny Thing Happened on the Way to the Forum,” both of which were produced at Town Hall. Here his singing of “Johanna” is magnificent!
Adam Perkes’ Pirelli is yet another in a string of superbly crafted manic characterizations which includes a well acted and well sung Mordred in the very fine “Camelot” Bernie Cardell directed for Performance Now Theater.
Matthew Gary is fine in the acting of Tobias. It will be wonderful when his vocal talent matches his acting skills. “No one’s Gonna Harm You” suffers.
Owen Nyland is strikingly well cast as Beadle Bamford. This is the best work this actor has done onstage thus far.
Judge Turpin is played with superb  masochistic panache by Shane Delavan. “Pretty Women,” his duet with Mr. Risner is ear-pleasing indeed.
Jeff Jesmer's scenic design provides us with an ingeniously constructed set that includes a very effective chute from the barber's chair as well as a very well designed set piece giving us the illusion of the oven into which Mr. Risner pushes Ms. McIntyre.
Visually the characters are too pretty really. Perhaps one might think in future of artists such as
maestro Todd Debreceni regarding the addition of a bulbous nose here and there or an unsightly wart. These characters need a dash of that which makes us believe they've already had, if you will forgive the reference, a "Hard Knock Life."
The musical direction by Midge McMoyer Smith is very fine indeed. Likewise most of Nicholas Roseth's conducting works admirably. It's a daunting challenge to pace the Sondheim proceedings in a synchronous manner that balances a quartet of young vocalists with that of the orchestra.
There are sparks, flares and flashes of talent. However the show never quite caught fire on this opening weekend performance. One fully expects the following performances will grow and self transform into the bonfire of insane genius intended by Mr. Sondheim.