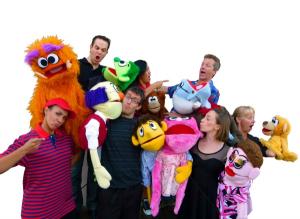 The cast of BDT's "Avenue Q"

Remember “Sesame Street?” Well, “Avenue Q” is sort of “Sesame Street” meets “South Park.” When we were introduced to “Sesame Street” we saw lots of fun puppets teaching kids that they were all special and that they’d be able to be and do whatever they wanted to be in Life. Right?  However … as we became adults that “South Park” aspect kicked in satirizing the way Life has of dashing our fondest hopes from time to time. Like that Rolling Stones’ song “You Can’t Always Get What You Want” this aspect starts to ring true for the characters of Avenue Q as sort of reality therapy. In a way this is what the musical “Avenue Q” is all about.
Like Sesame Street, the show’s creators use puppets, manipulated by visible onstage actors. The music and lyrics by Robert Lopez and Jeff Marx respectively are whimsical and fun.  In 2003 this show snagged three Tony Awards including one for Best Musical.
The issues these actors and puppets deal with in song and dance include: pornography, racism, homosexuality as well as those universal relationship problems we all face from time to time. It is to be noted that there is full puppet nudity and puppet sex onstage. And it’s howlingly funny! Just remember that this is an adult show and allows you the luxury of a night out without the kids for a change.
Boulder’s Dinner Theatre’s production of “Avenue Q” has much to recommend. The cast is superb.
Brett Ambler’s portrayal of Princeton, the college graduate who is looking for his “Purpose” in Life is brilliant.
Ellen Kaye plays his main squeeze, Kate Monster. You will remember Ms. Kaye from her high-flying Wendy in BDT’s production of “Peter Pan” a couple of seasons back. This time she is outstanding as Kate Monster.
Ashlie-Amber Harris debuts at BDT in the role of Gary Coleman. Ms. Harris is well known throughout the Denver/Boulder area for her spectacular set of pipes. She’s done “Rent,” “Pippin” and countless other musicals in the neighborhood and she will astound you every time she opens her mouth to sing.
You also get such great artists as last season’s Henry Award-winner Seth Caikowski and BDT favorite Joanie Brosseau. On some nights director Scott Beyette plays Christmas Eve’s boy friend, Brian and on others Brian Jackson plays the role.
There’s superb sound design by Wayne Kennedy, great music direction by Neal Dunfee and great lighting by Rachael Dugan. Amy Campion’s set design is spectacular.
The puppets created by Cory Gilstrap are magnificent.
You’ll laugh along with such great songs as: “If You Were Gay,” “The Internet is for Porn” and “The More You Ruv Someone…the More you Want to Kill Them.” The latter is thoroughly well sung by Marijune Scott and Ellen Kaye.
The show is given a leisurely pacing by director Scott Beyette.

And don’t forget that great menu! They have everything from Cordon Bleu to Prime Rib.  The Pork Wings taste so good you’ll believe that pigs can fly! (Sorry!)