Picasso at the Lapin Agile
Aurora Fox: through 10/14 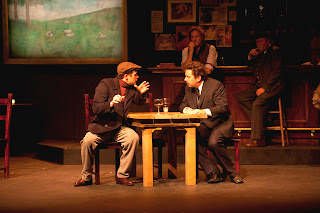 John Ashton has directed a very fine production of Steve Martin’s “Picasso at the Lapin Agile” on the main stage over at Aurora Fox Arts. It’s only playing through this weekend so you’ll have to scratch whatever is on your calendar and get tickets now. Ashton has a spectacular cast and its playing to huge audiences.
This reviewer prefers Ashton’s previous productions of this show like the one at Berardis simply because Martin’s play seems to be more suited to a more intimate venue. Don’t tell that to all the happy patrons at The Fox though. They all had a rollicking good time.
The cast includes such Denver favorites as: Rhonda Brown, Jack Wefso(Einstein), Tupper Cullum,  Kurt Brighton, Eric Mather(Schmendiman) and Benjamin Cowhick(Picasso). It’s a dream cast to be sure!
On the night this reviewer was in attendance Kurt Brighton’s Sagot stole the show creating waves of laughter whenever he opened his mouth to speak.
Wefso, Brown, Cowhick and Mather garnered their share of the laughter as well. However ... sometimes the scripted onstage laughter seemed forced due to the need to project into the huge auditorium.
Brandon Philip Case’s set and Jen Orf’s lighting add immeasurably to this fine evening of theatre. Sharon McClaury’s costume design is very fine indeed.  The costume she created for Ms. Brown is spot on!
Jonny Barber’s performance in the role of “the Visitor” is a hoot and a half! Awesome work!

You owe it to yourself to see this show.