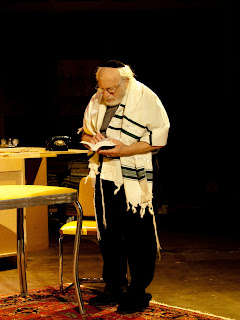 WOW!!!!!!!!!!!
I just got back from seeing “Visiting Mr. Green” at The Cherry Creek Theatre in the Shaver-Ramsey Showroom. The show was held a few minutes due to a “technical difficulty.”
No one cared though. The show is being given such an outstanding production all was forgiven and forgotten long before the first scene was over.
This is far and away the best direction to have been done by Pat Payne. The attention to detail, casting and pacing of the show is impeccable. Brava!
Joey Wishnia creates the most endearing character of the season in his work in the role of the elderly retired dry cleaner, Mr. Green.
Cajardo Lindsey is absolutely brilliant as Ross Gardiner, a 29-year-old corporate executive who nearly hit Mr. Green as the old man wandered out into traffic. Since his character was driving too fast and frightened Green enough that he fell down, the judge makes Ross go weekly to the old man’s apartment and help him out as community service. 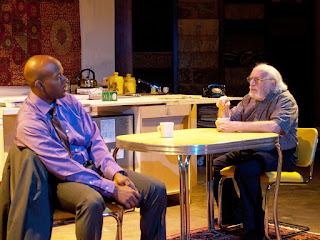 Both Mr. Wishnia and Mr. Lindsey have a gift for communicating their characters’ hearts and souls with a naturalness and a depth of feeling that places them among the very best in our community.
The friendship that grows out of this unfortunate incident is heart warming and deeply moving.
Both men find themselves revealing parts of themselves that they had not intended to make known in the course of events that transpires. These secret issues unveiled by Mr. Green and Ross Gardiner as their relationship deepens are potent both politically and socially in today’s world.
Jeff Baron’s recently updated play is remarkably well written. It is heart opening in its profound and universal embrace of all of humanity regardless of race, religion or sexual orientation.
Richard Pegg’s scenic design for Mr. Green’s dilapidated apartment is spot on.
There’s a fine sound design by Luke Allen Terry            and great lighting by Brian Miller. If one might paraphrase Polonius, costume designer Rose Mary Smith provides “apparel which doth always proclaim the men’s” characters superbly.
This production comes with the highest of recommendations from this reviewer’s desk.
Run to get tickets!