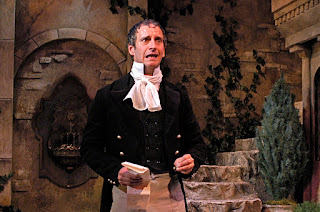 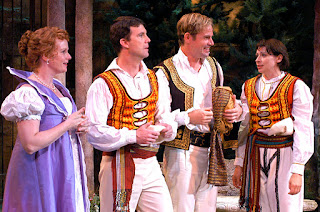 Philip C. Sneed has cast Shakespeare’s “Twelfth Night” impeccably and peppered it with delicious landmines of laughter. Rachel Fowler delivers a sublime Olivia. Geoff Kent is a dashing Orsino. Kate Berry is a superb Viola/Caesario. Jake Walker is a feisty Feste in fine voice strumming away at his balalaika. Logan Ernstthal is a floridly flatulent Sir Toby Belch. Josh Robinson turns in a very fine performance as Viola’s twin brother, Sebastian. Leslie O’Carroll provides sterling character work as Maria, Olivia’s waiting-gentlewoman. The opening scene, which is in many productions a complete wash was read passionately by Ms. Berry and Timothy Orr, who stepped in for Stephen Weitz as Antonio on the evening this reviewer was in attendance. Timothy McCracken - the son(s) in Curious Theatre’s “A Number” - is a despicably sanctimonious Malvolio. Splendid work! It helps to remember that the sanctimonious Puritans who, in Shakespeare’s day – as well as in our own! - All needed to be cross-gartered were constantly causing the theatres to be closed. Director Phillip Sneed’s directorial touches lean into the Dionysian pleasures with a bit of a naughty and sometimes raunchy enhancement. These Bacchanalian touches provide bright contrast to Malvolio’s contained and gagging self-righteousness. One might wish, however, that this old warhorse of a play had a bit of a friskier pacing. Perhaps it was the long workweek speaking, but once Malvolio gets his comeuppance, the rest of Shakespeare’s play always seems to drag. One also can’t help but wonder if Olivia’s eyesight is failing mistaking Mr. Robinson for Ms. Berry. Nevertheless … Mr. Sneed’s fine directorial work here is aided in no small part by the technical staff at Arvada Center. Brian Mallgrave’s excellent set design, Shannon McKinney’s lighting and the incomparable Steve Stevens’ sound design all figure in prominently. The sound of the creaking ship mast, crashing waves and thunder created the shipwreck at the top of the show brilliantly. Clare Henkel’s costumes put us smack dab in the middle of Albania, which the program tells us was called Illyria back in the early 1800s. This collaboration between the Colorado Shakespeare Festival Company and The Arvada Center for the Arts and Humanities is a huge success.
Go for the laughs!
Arvada CO – The Arvada Center in collaboration with the Colorado Shakespeare Festival (CSF) will open William Shakespeare’s Twelfth Night, or What You Will, a Comedy on Tuesday, May 1, 2012. Colorado Shakespeare Festival’s Producing Artistic Director, Philip C. Sneed, is directing the show. Twelfth Night will run in the intimate 220 seat Black Box Theater May 1 – 27. Previews are April 27 – 29 at 7:30pm nightly. Performances are Tuesday through Saturday at 7:30pm, Wednesday at 1:00 pm, Saturday and Sunday at 2:00pm. Talkbacks will be offered Friday, May 11 after the 7:30pm show and Wednesday, May 16 after the 1:00pm show. Ticket prices range from $25 (previews) - $47 for prime seating. To order tickets call 720-898-7200 or go online to www.arvadacenter.org.

Posted by David Marlowe Theatre Reviews at 7:28 AM