A VIEW FROM THE BRIDGE 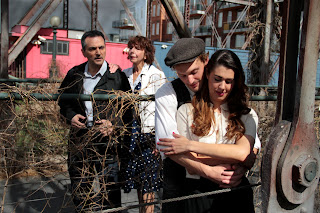 Arthur Miller’s “A View From the Bridge” is being given a superb reading at The Edge Theatre on West Colfax at Kipling.

Angela Astle is to be praised for her fine direction of this classic. If you want to feel what Arthur Miller wants the viewer to feel in this show, you can’t go wrong taking a ride over to The Edge Theatre. It’s in your face theatre in this intimate space, which has been set up in the round this time.


Rick Yaconis is outstanding as Eddie Carbone, the guy whose love for his immediate family gets in the way of his helping out his countrymen immigrating here to find work and rescue their starving families back in Italy. (Tell me this is not a timely production reflecting current political immigration battles.)
Carol Bloom turns in a thoroughly watchable performance in the role of Eddie's wife, Beatrice.


Rebecca Morphis’s portrayal of Eddie’s daughter, Catherine is most memorable. Morphis is a dark-eyed beauty who, is blessed with a real talent for the stage. There’s one scene in which Eddie, Catherine and Beatrice are having dinner at home.

It was pretty realistic what with all the spaghetti and meatballs and such. However… in my memory of briefly having married into such a family I seem to recall that there would have been a lot more thumb biting and chin brushing at the dinner table. Oh wait… the son-in-law wasn’t there yet. I’m just sayin.’

Stephen Siebert  plays the cute young immigrant named Rudolpho, whose masculinity comes into question because of his “sense of humor.” Siebert is visually just right for the role and does a mostly good job in the acting thereof. Unfortunately his Italian accent slides into Eastern Europe and the Ukraine from time to time.

Eddie thinks Rudolpho is gay because he likes to sing around the apartment house and down by the docks. He’s afraid that Rudolpho only wants to marry Catherine so he can become a citizen.

At first I didn’t think that Ryan Goold was going to be able to fulfill the requirements for the role of the immigrant, Marco. He started slowly and built this character beat by beat. By the time he thrust himself into the final melee with Eddie, the steam building up under his pressure cooker lid blows off and the spit flies.


Verl Hite is the lawyer, Mr. Alfieri. As narrator and the voice of reason in Miller’s play, Hite does well.

After the outstanding work done at The Edge Theatre this season it is to be noted that this venue has made a great leap.  One recalls the lines Marlon Brando got to slur in “On the Waterfront.” Before Yaconis, Ionoff and Astle came on the scene this little venue may have been looked upon as if it were “a bug.” Now with these three artists at the helm The Edge Theatre has become “a contender.”


This evening of theatre comes with high recommendations from this reviewer’s desk.

Hurry to get tickets.