The script of Germinal Stage Denver’s “The Misanthrope” is Moliere by way of Richard Wilbur. Mr. Wilbur translates the text with its essence in mind and keeps the rhyme intact. To this reviewer that means: Heaven on Earth! Moliere without the rhyme is like eating French toast that’s been dipped in the batter of egg and milk but not been fried. Ecch!!!!!!!!
This rhymed Moliere is the kind of French toast one gets as dessert!!!!!!! Scrumptious!

No powdered wigs, bustles or beauty spots! This contemporization of “The Misanthrope” by Richard Wilbur is a wonder. It not only holds to the true spirit of Moliere’s original, it rhymes like a dream. It’s reality therapy by way of eighteenth century France in which honesty and plain dealing once trumped the etiquette and the flattery of the Sun King’s court. 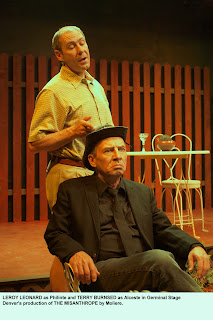 Leroy Leonard(above) and Terry Burnsed ( below)


Terry Burnsed passionately puts forth an intense delivery of Alceste’s outrage at the hypocrisy of Society.  His performance is one of the finest on stage this season. Burnsed’s rage explodes both physiologically and verbally in the reading of this renowned character. His performance puts one in mind of that of Peter Finch who won the Oscar for Best Actor in the 1976 Sidney Lumet film “Network” wherein the big time anchorman Howard Beale raged, ”I’m mad as Hell and I’m not going to take it any more.” One might wish to gently say, “Temper, temper,” to the actor who seems to be raging from his soul and not just reading lines. It is to be remembered that the veins stood out in Peter Finch’s forehead just like they do in Mr. Burnsed’s. The ears got just as red. The blood pressure spiked as seemingly high! Finch, who won all the awards for Best Actor in a dramatic film, didn’t live to receive his Oscar. We appreciate the passionate reading … however … we shall have no health crisis onstage!!!!!!!  (“Moderation in all things!”) But I digress.  Mr. Burnsed’s portrayal astounds!

Leroy Leonard is a fine Philinte. His delivery of the lines that reflect Alceste’s Rochfoucauldian
cynicism back to him are clearly read and hilariously delivered.

Julie Michalak’s scantily clad Celimene is just a hair north of a squeaky gangstah’s moll in her delivery. Always in control of Alceste’s uh … heart, she is the only one who can maneuver him out of his over-the-top reactions to the human frailties – mainly flattery – which enrage him in Aspen and in “Hickenlooper Land.”Ms. Michalak has an exceptional command of the role. 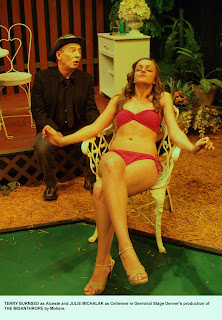 Eric Victor’s Oronte is magnificent! This actor has the task of being eviscerated by Alceste when the poor man gushes a poetic ode to the contrary misanthrope. Very funny work indeed! 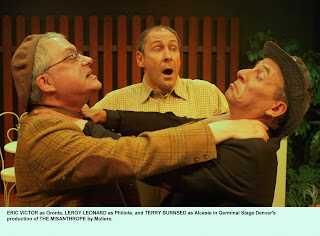 As DuBois, Alceste’s butler, Mark Moran continues his career of outrageous underling, walking the fine line between fawning servant and madhouse loony. His wall-eyed, spluttering fool of a servant, who doesn’t know if he’s doing a goose step or a turkey trot, is the very picture of someone who has to live constantly under the gun of a boss so incessantly honest about everyone  - warts and all! 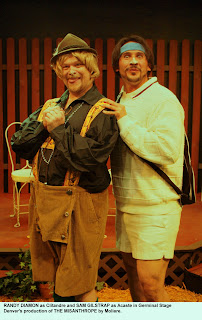 Germinal Stage Denver, located at West 44th Avenue and Alcott Street in Northwest Denver, presents
THE MISANTHROPE
This is the third production of the theatre’s 38th season.
Performances Friday (8:00, $21.75), Saturday (8:00, $23.75) and Sunday (7:00, $19.75) through June 10th.
Visa, Mastercard, and Discover accepted
For reservations for both productions or further information
call the Germinal Stage Denver box-office at  303.455.7108
Posted by David Marlowe Theatre Reviews at 7:20 PM