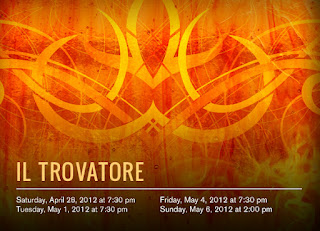 Giuseppe Verdi composed this opera in 1853.  A few of his other operas are: “Aida,” “La Traviata,” “Rigoletto” and “Nabucco.” “Il Trovatore” (The Troubadour) includes some of the most beloved and well-known music in the repertory. The famous Anvil Chorus is just one of the many exhilarating moments. The libretto is quite complex in its storytelling. However… if you pay close attention to Ferrando’s narration at the top of the show the mystery unravels with ease. This is aided in no small measure by the superb work done by Jeremy Sortore, who translated the libretto to the subtitles illuminated on the back of the seat directly in front of you. This opera was a huge success when it opened in 1853 and remains one of the most popular. The central character is Avucena, the gypsy whose mother was burned at the stake by the present Count di Luna’s father. The Count is in love with Leonora, who is also loved by Manrico, who is believed to be Avucena’ son. Duels, executions and suicides are all part of the story. Greg Carpenter, the General Director of Opera Colorado, has said, “If one were to reduce the story to one word it would be REVENGE.” Mr. Carpenter announced just before curtain on opening night that this production cost eight hundred thousand dollars to produce and it shows every penny. The production, directed by Tara Faircloth and conducted by Alexander Polichianko, is aesthetically delicious. The production values are magnificent. Alan Moyer’s scenery is astounding. The scenic architecture is all done on the slant to give those in attendance an enhanced visualization of the twisted nature of Count di Luna and the vengeful events in the story. Diva Michele Capalbo, who plays Leonora, has an incredible instrument, and exploits it to the full here. Her soprano is powerful and yet is able to deliver some of the most exquisite pianissimo moments one may ever expect to hear upon the opera stage. 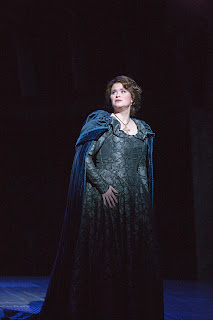 These are breathtaking musical moments that you will never ever forget!  Wayne Tigges (basso) is superb in the role of Ferrando. Mezzo Nancy Maultsy gives us a gutsy Avucena. Baritone Robert Hyman’s Count di Luna is exceptional. Tenor August Amonov portrays Manrico with passion. The scrumptious Opera Colorado Orchestra and Chorus stun! The reason this opera has been absent from the last several seasons is due to the fact that it is difficult to find opera singers who are capable of singing this daunting work. Opera Colorado has succeeded on every count in giving us a balanced production that is a feast for the ear as well as the eye. The show is auditory champagne.
Run to see it!
Ellie Caulkins Opera House Tickets
14th & Curtis Streets,  Denver,  CO  80204
Box Office Numbers
For Opera performances, please contact the Opera Colorado Box Office: (303) 468-2030
TTY numbers for Ticketmaster: 800-755-6244, 877-474-4833, or 877-475-4833