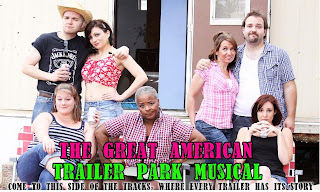 If you are lookin’ for good old-fashioned white trash entertainment with lotsa music and singin’ and dancin’ then you should get on over to see Ignite’s fine production of “The Great American Trailer Park Musical.” It’s at Armadillo Acres aka Aurora Fox Arts. It’s got great tunes all written by David Nehls and played by a great in-trailer band led by Music Director Midge McMoyer-Smith. The in trailer décor looks like they have shopped til they dropped over to Army Navy Surplus and the like. I think I even saw one of those singin’ wall fish. You can only get them at Army and Navy. Benjy Schirm has done the scenic décor for this piece with an eye to the eyesore. Some of the folk who wandered in from off the strip there on East Colfax didn’t know what realism looked like until they got a gander at this show. The show works just fine in the intimacy of the black box studio there at Aurora Fox. You do not need no doublewide stage to perform the likes of Mr. Nehls’ masterwork. No sir! I would recommend this to every redneck cowpoke or stripper off the strip without havin’ qualm one. And let me just tell you that when you see what director Pam Clifton has gotten these degenerates to do onstage you will be wantin’ to audition for her next travesty right now. Never in the history of theatre on East Colfax have so many had so little on and shaken it so well. They must have been drinkin’ a lot of hooch during rehearsal as there are piles of Bud cans rollin’ around outside those lovely mobile homes. These are characters ripped from the pages of low life literature such as could only be prepared by those street hacks of yesteryear and their literary progeny. All seriousness aside this is fun, fun fun! If you are a connoisseur (thank God for spell check!) who likes Larry, The Cable Guy you are gonna love this show. The costumes are of the tacky and tawdry variety with the emphasis on hilarious! Since nobody is named as being responsible for these - were they afraid someone might call the fashion police? - one may assume that they can be attributed to director Clifton. All seriousness aside this is a laugh-riot of a show with a cast that is adorable.  Alix Brickley, Stephanie Hancock and Maggie Tisdale provide superb solos and a great trio as long time members of this community. The multi-talented Margie Lamb (Best Actress in a Musical for her role in "Next to Normal") and Patrick Brownson (the superb Cookie Monster in Vintage Theatre’s “Avenue Q”) portray two trailer park married folk whose marriage is going down the tubes faster than you can say Pippi. Kia Chapman (Pippi) is gorgeous and has a superb soprano. Her stage movement is stupefyingly deelish.  Ms. Lamb plays Jeannie, an agoraphobic woman who has not left her mobile home since her little boy was kidnapped years ago. Her husband, Norbert IS able to leave the mobile home and finds, well …  you’ll see. Brandon Keller plays Duke, a jealous dude who sniffs Magic Markers. Stephanie Prugh’s choreography is outstanding! Without giving any spoilers out I just would like to add that this is one of the most entertaining shows to come down the pike in quite a while. If you love to laugh run to get tickets.
Not to be missed.