AMATEUR NIGHT AT THE BIG HEART 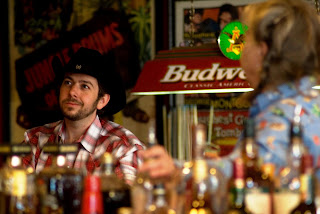 If you like memory plays that are strong on character and that have a dynamic sense of place you will love “Amateur Night at the Big Heart.” The play, penned by Terry Dodd, is currently on view on the main stage at Aurora Fox Arts. Dodd is at his best with this play filled with what he does best: Homespun Americana. Playwright Dodd spent a lot of time as a young man going along with his father who was a cop in Pueblo assigned to a beat that involved “all things alcohol.” The characters and their activities and the bar itself, feel like a composite of a lot of mostly happy memories from that time. Dodd has said that the play was inspired by his viewing of a production of William Saroyan’s “The Time of Your Life” that he saw at The Denver Center a number of years and then spiked with a nod to “Cheers.” Shaun Albrechtson has designed a gorgeous replica of a bar right onstage. It’s the genuine article and it’s the first thing you’ll fall in love with upon entering the auditorium. Lighting designer Shannon McKinney provides the professional work Denver audiences have come to expect from her. Likewise El Armstrong gives us his usual ear-pleasing sound design. What you will fall in love with most though is the cast. Jack Wefso’s portrayal of Stacker, the birthday boy who is just turning 35 and thinks he’s hit middle age is thoroughly engaging. Jack Casperson plays the world’s oldest busboy, whose intentionally unfortunate ventriloquist act is charming.  It’s a treat to get to see Karen Erickson back onstage again. Her portrayal of cook and accountant Jo (hopefully she’s not cooking the books!) lights the place up. Erickson's slow dance with Mr. Casperson at final curtain is the perfect emotional night-cap after this rowdy night of drinkin’ and reminiscin’ at The Big Heart. Rhonda Brown is most memorable as bar owner Marge. Her character is as close as it gets to the voice of reason in this play and she gets to nail some of the funniest lines. Nils Swanson is fine as an early evening drunk who crawls in already soused before the party has even begun. Brian Brooks turns in his best work to date as an honorable guy whose identity is mistaken to be that of a shady character on the lamm by these rustic characters. Lisa Rosenhagen sparkles as Shirley, a woman who has just lost her boy friend to a woman “who collects lighters.” Rosenhagen’s acting duet with Kurt Brighton, who plays Shirley’s ex boyfriend, Ron is one of the best moments of the evening. Another is a tete a tete involving Jack Wefso as Stacker being stricken by Diana Dresser’s mysterious Marie. Seein’ this play is kind of like going into a bar you’ve never been to before. It’s a little uncomfortable at first, not knowin' anybody there. Then you sit back and start getting to know these characters. In very short order everyone’s kind of like family. You laugh at their cornball jokes and cry with em over their heartbreaks. Dodd’s heartfelt country western memories could just get to you with a big heartbreak. As you take this journey with playwright Dodd and his characters you could just find that leaving them behind is kind of sad.  To paraphrase a song once sung by Burl Ives, “A little bitty tear might let you down.”