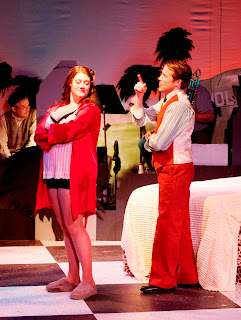 Maggie Tisdale and Jerry Cunningham
Photo Credit: Denver Mind Media
“City of Angels” is a Tony Award-winning musical that’s sort of a two for one deal. You get one musical about a screenwriter in Technicolor reality and another about the private detective character he’s writing in his black and white film noir screenplay.
You remember film noir-those films with actors like Humphrey Bogart as the private detective that start out with some guy’s voice over saying: “Her name was Dee Dee. Her game was blackmail.” Then the ominous sounds of ‘Dun! Dun! Dun!’ are heard as we slowly pan out from a cigarette being lit by a guy in a London Fog coat for a lady in one of those backless little numbers that were so sassy back then.

Jerry Cunningham Plays Stine, typing away on the screenplay. Ken Paul plays Stone, Stine’s somewhat over confident- shall we say ballsy? - alter ego and the star of the film noir movie on the opposite side of the stage.
Cunningham and Ken Paul knock it out of the park with their ear-pleasing duet “You’re Nothing Without Me” about coming to terms with each other as screenwriter and the character… I almost said ‘creature’ he’s created.
Cunningham’s singing of “Funny,” Stine’s eleventh hour lament, is one of the highlights of the show.
So enough about the Guys! What about the Dolls in this show? 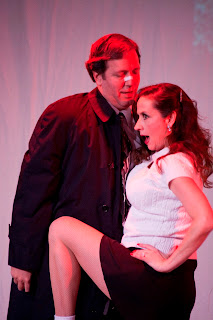 Ken Paul and Abby Apple Boes
Photo credit: Denver Mind Media
Abby Apple Boes is a knock-out and in fine voice as femme fatale Alaura. Maggie Tisdale’s a smashing Oolie. The other gorgeous dames on board are Melissa Fike and Alix Brikley.
And that’s not even mentioning the Dolls in the Jazz Group Angel City 4: Juliette Petersen and Kerri Emswiller.
Robert Payo and Alejandro Roldan provide the male “doo wadda doo wops.”
Traci Kern’s musical direction of this extremely difficult musical is outstanding.
Brian Walker Smith has cast this show with an eye to the look of those grand old 1940s classics and an ear to voices that can really soar with the fast-paced and syncopated scatting jazzy score that’s been compared to “Manhattan Transfer on steroids.”
Choreographer Piper Arpan has treated us to some exhilarating dance numbers including a Calypso hoofer called “All You Have to Do is Wait.” There are a lot of big Hollywood-style production numbers and Arpan’s choreography is of the sassy variety that works perfectly.
Jim Hitzke is hilarious as Buddy, a producer who’s rewriting every syllable Stine writes almost before he writes it especially in the song, “The Buddy System.”

Travis Yamamoto leads the onstage orchestra perched on the Los Angeles skyline with a sure hand. The jazzy sound produced by the musicans adds so much to the over all evening!