“Catch Me If You Can” is lightweight frothy fluff that turns out to be a rather endearing evening of good old-fashioned fun!
Stephen Anthony portrays its central character, Frank Abagnale, Jr.
Mr. Anthony has an intoxicating stage presence and sings and dances his way through this con man’s true-life story with amiable brio. 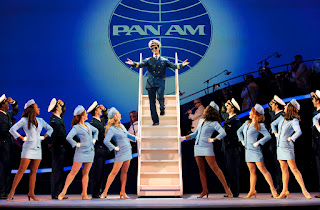 Stephen Anthony and Ensemble
Having spoiled us all with the books for such musicals as “Ragtime,” one must admit that Terrence McNally’s book for “Catch Me If You Can” is one of his lesser successes. The characters often have a rather flimsy feel to them.  However …  they are portrayed by some of the best touring company actors to have been seen of late.
A few of the actors standing out in this production are Aubrey Mae Davis, (Brenda,) Amy Burgmeier (Carol Strong) and D. Scott Withers (Roger Strong) as a Louisiana family taken in by Mr. Abegnale Jr.’s boyish if blatantly fraudulent charm. Their singing and dancing of “Our Family Tree” is exhilarating.
The scenes describing this con man’s world are designed and choreographed in such a way as to draw us in with a mesmerizing palette of colors. Those involving that of the FBI agents in his pursuit fall flat in their attempt to provide a dramatic black and white 'film noir' contrast.
There’s a sensational onstage orchestra that adds immeasurably to the enjoyment of this evening of musical theatre. Director Jack O’Brien’s pacing moves the show along at a good clip.
The music and lyrics penned by Marc Shaiman and Scott Wittman and the music composed by Mr. Shaiman will make you want to run out and buy the CD.
The graphics and images projected as back drop to the proceedings bring up memories of that time when the fledgling television industry was in transition from black and white to the wonderful world of color. 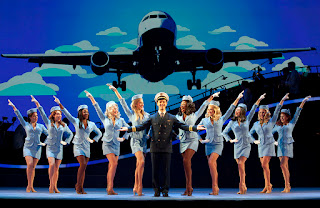 The Buell Theatre limited engagement from February 26 – March 10. Tickets are on sale now at denvercenter.org. Single tickets for CATCH ME IF YOU CAN start at just $20. To charge by phone, call Denver Center Ticket Services at 303.893.4100. TTY (for Deaf and hard-of-hearing patrons): 303.893.9582. Groups of 10 or more, please call 303.446.4829. Additionally, tickets may be purchased at the Denver Center Ticket Office, located in the Helen Bonfils Theatre Complex lobby. Buy and print online at denvercenter.org.Marlowe's Musings