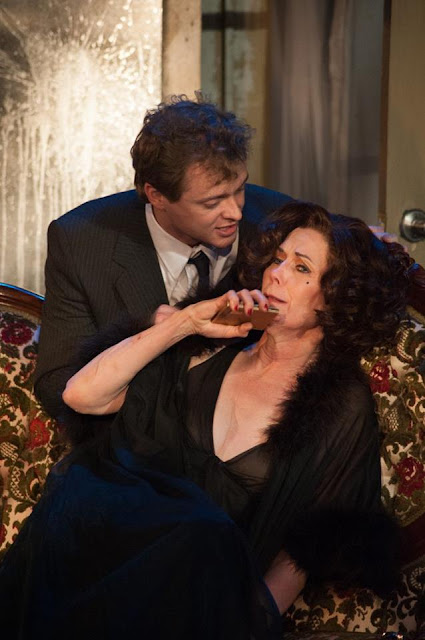 L:R Drew Hirschboeck and Marcia Ragonetti (Photo credit DenverMind Media)
Co-directors Craig A. Bond and Evgueni Mlodik have cast renowned mezzo-soprano Marcia Ragonetti as Norma Desmond in their current production of “Sunset Boulevard.” Ragonetti is known to be one of the Rocky Mountain region’s premiere talents in the opera world, and her performance in the title role is stunning.
But Bond and Mlodik did not stop there. They have also cast dashing actor Drew Hirschboeck as Joe Gillis, Norma’s kept man.
Based upon the movie starring Gloria Swanson and William Holden, and directed by Billy Wilder, “Sunset Boulevard” was nominated for 11 Oscars and got 3!
Lloyd Webber’s musical received 12 Tony nominations and won 8, including Best Musical and Best Actress.
The show, named after the boulevard that runs through Beverly Hills and L. A. has a film noir look with touches of Wilder’s penchant for black comedy.
The story revolves around Norma Desmond, a film star of the silent era that couldn’t make the transition to talkies. When we meet her she is a delusional and very lonely woman dwarfed by her Beverly Hills mansion in much the same way Charles Foster Kane was in the Xanadu of “Citizen Kane.”
When she meets down on his luck screenwriter Joe Gillis, Norma sees the possibility of his “doctoring” her script, “Salome,” which she hopes will assure her glorious return to the silver screen.
The twisted events in the evolving relationship between Joe and Norma reflect the seamy side of Hollywood and gradually spiral out of control into tragedy.
Ms. Ragonetti’s singing of “With One Look” and “As If We Never Said Goodbye” are solid gold show-stoppers. Her duet with Mr. Hirschboeck, “The Perfect Year,” is ear-pleasing indeed.

Brooding and internalized, Wes Munsil portrays caretaker Max Von Mayerling with  a dark presence and deep, resonant vocals. Miranda Byers is a sweet and genuine Betty Schaefer. David Ballew provides comic relief as a flaming tailor in the scene in which Norma has Joe dressed to kill.
Debbie Faber has created eye-popping gowns for Ms. Ragonetti.Marlowe's Musings
Vintage Theatre presents
"Sunset Boulevard"
April 29-May 29
When a faded star from a bygone era, meets a struggling screenwriter she is sure a return to the big screen will follow.
Fri/Sat at 7:30 p.m.; Sun at 2:30 p.m.
$28 - $34
303-856-7830 or online at http://www.vintagetheatre.org/
Vintage Theatre, 1468 Dayton St., Aurora 80010