Catch Me If You Can
Aurora Fox Theatre: through May 15 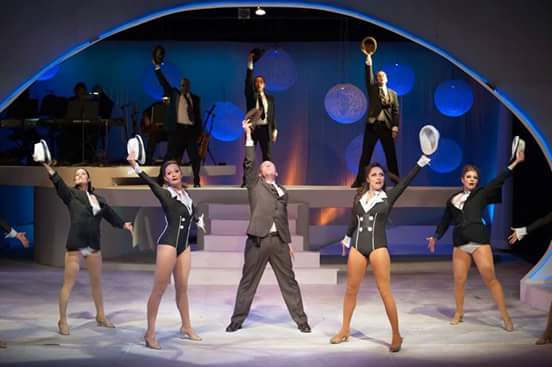 Although Terrance McNally’s book for “Catch Me If You Can” is a bit disjointed and overlong in its picaresque ramblings, the current production now on view at Aurora Fox Arts is filled to the brim with thoroughly enjoyable performances and technical achievements.
Besides directing, Piper Lindsay Arpan also did the exhilarating choreography for the show. Where she found all the gorgeous dancers for the high-kicking female chorus is a mystery! (You may feel as though you’ve stumbled into a high end Las Vegas extravaganza at some points in the show!)
Tim Howard is outstanding in the role of con artist Frank Abagnale, Jr.
Howard, who has wowed Denver audiences with his portrayals of everything from J. Pierpont Finch in "How to Succeed" to the conniving  Freddy Benson  in "Dirty Rotten Scoundrels" unleashes a whirlwind of musical theatre talent as young Frank. His singing of such numbers as: "Live in Living Color"and "Seven Wonders" stuns.
Keegan Flaugh provides superb contrast as Frank’s nemesis, Special Agent Carl Hanratty. Mr. Flaugh is no stranger to the world of musical comedy either. His work is well known for his Mack in Vintage Theatre's "Mack n Mable" and Nicky Arnstein in "Funny Girl." This artist is at his best in his performance of such numbers as: "Don't Break the Rules" and "The Man Inside the Clues."
Andy Sievers is amiably paternal as Frank Abignale Sr.   Having recently succeeded brilliantly as the detective,Lieutenant Ciofi, in Vintage Theatre's "Curtains,"Sievers delivers the goods once again in such numbers as "Little Boy Be a Man," his duet with Flaugh.
Heather Lacy’s portrayal of Paula Abagnale, Frank Jr.’s French mother, is deliciously sexy.   That's not a great surprise when one remembers her  indelible portrayal of the ethereal spirit, Elvira, in Arvada Center's "Blithe Spirit."Ms. Lacy is a class act that needs to be cast much more often on the Denver stage.
Lindsay Fuller’s Brenda is sweet and genuine.
Sharon Kaye White sets the stage on fire with her hysterically funny belting of “Our Family Tree.”
Brandon Case’s ovoid frame for the scenic design, lit by the fantasia of colors in the palette of Seth Alison’s lighting design is eye-pleasing indeed. El Armstrong’s sound design is his best in memory. Nikki Harrison’s costumes are a continual stream of eye-popping bodaciousness!
The songs are nearly all delightful in the listening and mostly all forgotten by the time one leaves the building. Nevertheless… the actors and the techies for this show make your trip to the Aurora Fox Theatre more than worthwhile.