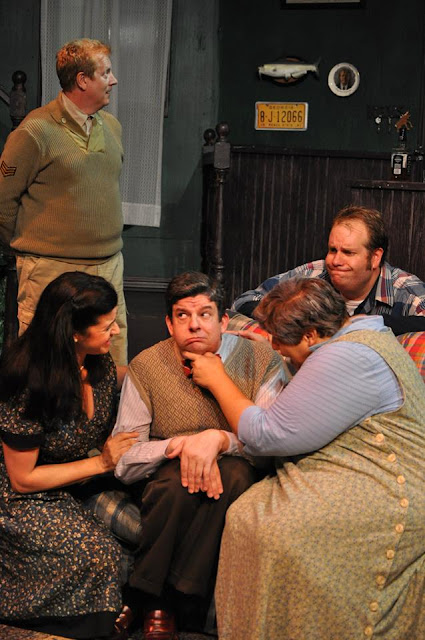 Larry Shue’s “The Foreigner,” now on view at The John Hand Theatre on Lowry, is Bernie Cardell’s hundredth production! The show is a hoot and I hope you can still get a ticket! If not, call the box office and insist that they extend!
Director Katie Mangett has provided us with a great cast and elicited comic portrayals that are wonderfully human. To paraphrase Mangett in her director’s notes ‘this play can easily lean into stereotypical characterizations.’ To her credit and that of her cast that is not our experience.
The Meeks Fishing Lodge in Tilghman County, Georgia is the setting and British Sergeant Froggy Le Sueur has brought his friend Charlie for a bit of a respite from stressing about his very ill wife. Charlie is socially challenged and not wishing to interact with the locals so Froggy suggests he pretend to be a ‘foreigner’ unable to understand what’s going on around him at the lodge. The oncoming train wreck of adoration by the elderly widow who owns the resort ( a very funny Mari Geasair!) allows for lots of laughter born of confusion.
Andy Anderson is a sensationally funny Froggy who imagines the conceit of Charlie being an ignorant foreigner who can’t understand or speak English.  However... it's Cardell who steals the show as a hilarious Charlie Baker. One of the highlights of his performance is the inventive tall tale he spins out of the intentional gibberish of his ‘national patois’ enhanced by semaphore-like gesticulation.
Luke Terry is a stitch as the adorably challenged Ellard Simms.
Adrian Egolf is magnificent in the role of Catherine Simms, the belle of the Fishing Lodge who is engaged to the narrow-minded Reverend David Marshall Lee (Luke Sorge.)
Leroy Leonard turns in a solid performance in the role of the redneck Owen Musser. Leonard’s portrayal provides stark contrast to the other characters allowing us to feel a menace seldom felt in other productions of this play.Marlowe's Musings