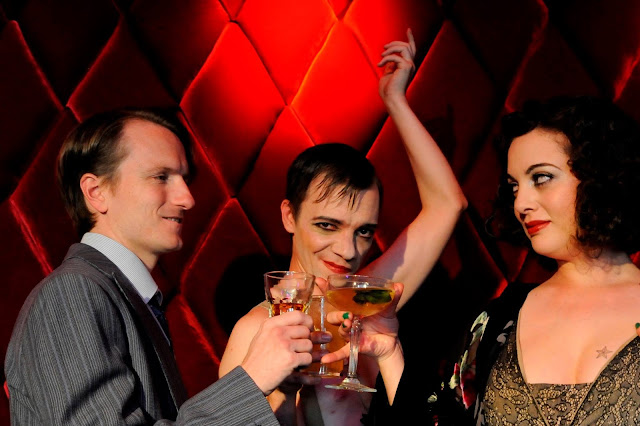 Lyndsay Giraldi-Palmer sizzles as that deliciously decadent morsel starring at The Kit Kat Club, Sally Bowles.
Jeremy Palmer plays Sally’s naïve American boy friend, Cliff, the alter ego of Christopher Isherwood who wrote the book, “Goodbye to Berlin” on which the musical is based. Being real life husband and wife, it’s not surprising that these two fine musical theatre actors have dynamic chemistry. Since this production is based upon the Broadway revival it includes the song “Don’t Go” which allows Cliff to become a more solid character  and showcases Mr. Palmer’s superb musical theatre skills as well.
Daniel Traylor is outstanding in the acting and singing of that sleazy boy-toy Emcee. Traylor is aided in no small part by Garrett Zuercher, an amazing actor from New York, who moves deliciously as a mirror personality.
Mark Dissette delivers a touching portrayal of Herr Schultz.
Lucy Roucis is truly memorable as Fraulein Schneider. Her command of the character gives us an agreeable landlady willing to compromise everything in order to survive. Her final speech, in which she is ripped from her one chance at love is heart-wrenching.
Ashley Kelashian delivers a convincingly mean-spirited Fraulein Kost.
Craig Breitenbach’s sound, Stephen D. Mazzeno’s lighting design and Linda Morken’s costumes are all masterfully made.
For the last few seasons Phamaly has been on a good solid plateau of accomplishment. So good in fact that they were recently invited to perform in Japan. Longtime artistic director Steve Willson is to be praised for his outstanding work.
When Willson retired Bryce Alexander took the reins. As with any change of this magnitude things will be different. One couldn’t help but wonder whether this would be for better or worse.
With his directing of the perennial classic CABARET we get an eye and ear full of the answer. Alexander is pushing the now internationally acclaimed company to new goals. He’s not afraid to take risks and so far has succeeded brilliantly. With CABARET this company rises to a thrilling new level.
The choreography of the group, which has always been good in the capable hands of Debbie Stark, now co-choreographed by Ms. Stark and Ronni Gallup - exhibits a freedom of movement and expressiveness previously unseen.
Mary Dailey’s music direction provides a richly textured sound from the band that will put you in mind of the original Broadway cast recording on vinyl. If you’re old enough to remember running to the record store to get it back in nineteen sixty something you’ll know what I mean.