The touring production of “La Cage Aux Folles,” which is now on view at The Buell Theatre, has much to recommend despite one flaw. Dashing star of stage and screen George Hamilton has a difficult time projecting one very important aspect of his character, Georges. This character is an impresario par excellence and Mr. Hamilton did not have much of that show biz energy and flair going for him on the night this reviewer was in attendance. Perhaps he was in poor health that evening. One hopes that his energy level improved by the following evening.

Left to right: George Hamilton and Christopher Sieber
Christopher Sieber is, however, brilliant as Albin. His acting, singing and dancing of this beloved character are formidable. Especially in the big numbers such as: “A Little More Mascara,” “I am What I Am” and “The Best of Times!” 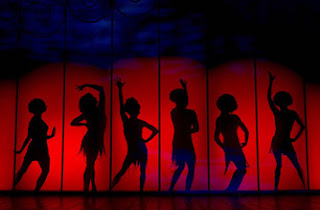 Also memorable are the Cagelles, who first seen in silhouette backlit in Nick Richings’ sexy orange lighting design turn in some phenomenal dancing and singing. Their dancing is of the limber, athletic variety that sometimes even leans into that of the contortionist! Awesome work!
Gay Marshall is a brilliant Jacqueline full of sparkle and fizz!
If you are a “La Cage Aux Folles” virgin and have not seen it on Broadway then I would say run to get a ticket. The show is always the quintessential draw for the GLBT community. Tim Shartall’s Scenic Design worked superbly allowing the members of the orchestra to appear in two boxes flanking the proscenium of Georges’ and Albin’s St. Tropez nightclub.
Matthew Wright’s costume design is a fantasia of colorful fashion that is heightened by the Wig and Makeup design of Richard Mawbey. Nevertheless… if you, like this reviewer, have seen one or more of this grand show’s incarnations on Broadway you could just be a little disappointed in the uneven nature of the performances. Regardless, you’re going to be singing those great old Jerry Herman tunes for days!