Iddo Netanyahu’s new play “A Happy End” is currently being showcased at the Buntport Theatre at 8th and Lipan. Kent Thompson was the first to present Netanyahu’s work in this country in May 2011 as a staged-reading at the Denver Center Theatre Company. The playwright is the younger brother of the Israeli Prime Minister. Besides being a writer Netanyahu is also a physician. He studied at South High School when his father was a professor at D.U.
The play is directed by renowned actor/director Ami Dayan, whose work in the past includes the critically acclaimed adaptation of  “A Tale of a Tiger” by Dario Fo. The Denver Center Theatre Company, The Colorado Shakespeare Festival and the Roe Green Foundation have commissioned Dayan. His directorial credits In New York City include: “The Man Himself,” “Conviction” and “Masked.” 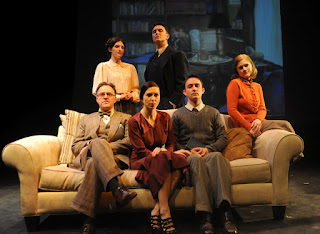 Left to right above: Mary Cates and James O'Hagan-Murphy
Left to right seated: Kevin Hart, Zuzana Stivinova, Evan Duggan and Heather Taylor
The play deals with a Jewish family’s dilemma in 1932 Berlin just after the elections that put Adolph Hitler into power. Should they leave their home in Germany to go to Paris or the United States or stay? It asks us as audience what would we do in a similar situation. We all know the tragic events, which occurred shortly thereafter. Still it is a provocative and disturbing question. How can one know when a corrupt political figure will choose to create a horror such as the Holocaust?
Zuzana Stivinova portrays Leah Erdmann, a wife and mother, who like her physicist husband and young son cannot imagine that any election could result in such a heinous and inhuman outcome as what would soon occur. Ms. Stivinova has been nominated three times for the Czechoslovakian Film Academy Award. Her range as an actor is astounding and she delivers the lines in Mr. Netanyahu’s play as if it were classical music. Few actors in this country can move from pianissimo to forte or fortissimo with such aplomb and grace. Likewise her facial expressions, physical stage movement and vocal tonality create an impression that is utterly congruent. 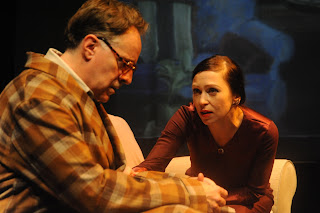 Kevin Hart is superb in his portrayal of  physicist Mark Erdmann, Leah’s husband.
James O’Hagan-Murphy’s portrayal of Dieter Kraft, Erdmann’s colleague, is some of his best work to date. 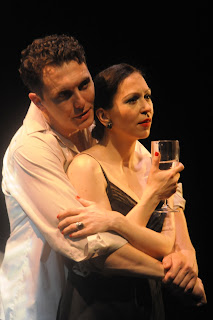 Mary Cates, Heather Taylor and Evan Duggan round out the cast with very fine supporting work.
The characters are ordinary people like you and me. They are going about their lives in the way they always have, working hard, playing hard and using their God-given talents to create as much of a beautiful legacy as they can. So there are more questions than answers here. People live in a world of quotidian pleasures, pains and problems.
Often what is really going on in our world is not even carried in the media. Many times government owned media provides us with propaganda and smoke screens at just those moments when one most needs to know the truth. The play is very honest in its approach to the subject. It is always tempting to put forth a bit of creative deceit in order to promote a holy cause. This is never the case in Netanyahu’s play.
The characters in his play do not include the beasts that will soon devastate the world. We only hear the bestial rhetoric via radio or see intimate mirror images of the vast tsunami of anti Semitism about to inundate through small incidents of bigotry and exclusion.
The characters of the play see only the incremental changes leading up to the Holocaust. True, we as audience have the ability to look into the rear view mirror of history. But one must never be too arrogant or smug while thinking this will never happen to me. In a not so esoteric way the playwright asks us as theatergoers “What would you really do in such circumstances?”
Without spoiling your discovery of this fine artistic work this reviewer will just say that the playwright engages the playgoer at the top of the play in a rather unusual fashion. When you go, and you must, you will see what I mean. It’s always refreshing to see new avenues for setting up a story onstage.
This is a cautionary tale told in retrospect with chutzpah and zeal by a team of very fine artists. The songs sung by Ms Stivinova in bridging the scenes evoke the era in auditory terms. The visuals provided in projections are random and generic. Perhaps this is best, making one feel the quotidian aspect of life in Germany in 1932. In many ways the looming horror is kept just far enough at bay so that the characters in the play are not able to put the pieces of the puzzle together.
Netenyahu, Stivinova and Dayan wield their theatrical sword with a powerful and energetic grace.
We are privileged to live in a free country. We pray that religious fanaticism, political interference and media brainwashing never rise up creating times of persecution in future. Playwright Netanyahu admonishes us all to be constantly alert, aware, and zealous in the protection of the freedoms that keep all of humanity safe.
This show cries out to be seen.