The opener for The Arvada Center’s 2012-2013 season is based on a 1988 film that starred Steve Martin and Michael Caine as two con men on the French Riviera. One is suave and debonair and the other is a small-time swindler. The movie was good. The Broadway musical is AWESOME! 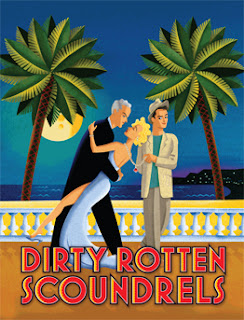 Dear reader, you have to know right from the get go that this is going to be a long list of accolades.
Rod Lansberry’s direction of “Dirty Rotten Scoundrels” is Scrum Diddly!
Kitty Skilman Hilsabeck’s choreography divine. Breathtaking!
The lighting by Shannon McKinney is outstanding.
Brian Mallgrave’s scenic design is so grand and so well crafted that we are in complete awe.
Clare Henkel’s costumes are as always, spot on!
The performances are so brilliant this reviewer was in heaven all evening.
David Nehls made that glorious music sound utterly celestial.
The supporting cast of local stars stuns in every number. Among them are such stars as: Matthew Daley, Matt LaFontaine, Brian Jackson, Bob Hoppe, Mark Rubald, Katie Ulrich, Mercedes Perez, Daniel Herron, Alicia Dunfee, Valerie Hill, Heather Doris and  Piper Lindsay Arpan! WOW!

The leads were good,too!
Dennis Parlato played Lawrence Jameson, the part that John Lithgow did on Broadway, brilliantly.
Ben Nordstrom is a sensationally funny Freddy, the role that won Norbert Leo Butz the Tony for Best Supporting Actor
on Broadway.
Susie Roelofsz is musical theatre dynamite as Muriel Eubanks. One must thank her again and again for her superbly sung"What Was a Woman To Do?"
Laura E Taylor's portrayal of Christine Colgate is thoroughly well sung.
Gary Lynch’s performance as Andre Thibault is superb.
Not to be missed.

In case  you missed something... I ADORED THIS SHOW!

Dirty Rotten Scoundrels directed by Rod A. Lansberry on September 11 running through September 30 in the Main Stage Theater. Dirty Rotten Scoundrels is written by Jeffrey Lane with music and lyrics by David Yazbek. Performances are Tuesday – Saturday at 7:30 pm, Wednesday at 1pm, Saturday and Sunday at 2pm.  Preview performances are September 7 - 9. Moderated talkbacks with the cast are offered on Friday, September 21 after 7:30 pm show and Wednesday, September 26 after 1:00 pm show.  For more information and to purchase tickets, go to www.arvadacenter.org or call 720-898-7200.Marlowe's Musings
Posted by David Marlowe Theatre Reviews at 10:05 PM