The Turn of the Screw”

Benjamin Britten’s “The Turn of the Screw” is currently on view at Central City Opera. Britten composed the English chamber opera and Myfanwy Piper did the libretto based on the Henry James novella of the same title. The opera premiered in London in 1954.

Visually the opera is given a stark look of black and white that is almost completely devoid of color. Even the costumes are done in varied shades of black and grey. An iris-like effect is used to open and close upon black and white images of the children’s house at Bly and its bleak environs. Often the slides used are presented upside down. As a result those in attendance are given to wonder whether the events in the opera are really happening or are indicative of the Governess’s descent into madness. Upon leaving the opera house one lady who had attended was heard to say that she had felt as if she had been present at a black and white film. Perhaps. But certainly not silent.

The music is a mix of tonality and dissonance. The unsettling nature of the music may cause one to think of John Williams’ theme for the movie “Jaws,” and the dissonant nature of Bernard Hermann’s musical composition for the shower in Alfred Hitchcock’s “Psycho.”

The story has to do with a Governess who is hired by a man who is relinquishing the guardianship of two children to her care. She is told in the Prologue that she is not to contact him or to abandon them. Throughout the opera one is aware of two previous servants at Bly House – Peter Quint and Miss Jessel- who, now dead, one supposes abused the children and are presently attempting to “possess” them. 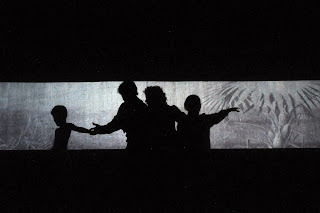 It’s a dark story that is quite esoteric and cryptic to say the least. Should one wish to dig deeper into Britten’s subtext one might find clues of a highly sexual nature in the Latin chants which are sung at various points in the opera.

The technical work is of the usual high quality expected at this venue. Half lighting, back lighting and lighting, which isolates and confines a character to a specific pool of light on a darkened stage are all used to great advantage.

It’s a chilly night of opera that may not be the cup of tea deemed suitable for some opera fans.
Director Allesandro Talevi involves the audience right from the start by having Vale Rideout walk through the auditorium to sing the Prologue. Rideout is superb in the opener and then later as the apparition of Peter Quint. Sinead Mulhern is outstanding in the role of the Governess. John Healy navigates the difficult singing of young Miles with more success than many opera singers of his age could.

This opera is sensationally well produced. Nevertheless … its unsettling and disturbing nature may not be every operagoer’s cup o’ tea.

For tickets go online at centralcityopera.org