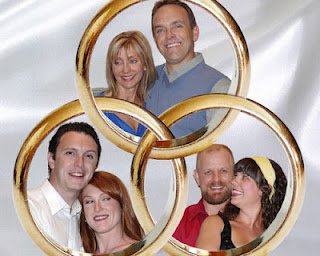 If you’re not a prude and have any kind of a sense of humor you’re going to love Jeff Gould’s “It’s Just Sex.”
Director Bill Smith and his very hospitable -and experimentally randy-cast, will make you feel right at home.
Patty Ionoff plays Joan, a wife who comes home to find her husband, Phil (Scott Bellot) about to engage in some 'chesterfield rugby' with a very sexy hooker (Rebekah Shibao.) They disengage and Joan gets out the Lysol to tidy up the leather sofa.
Greg (James O’Hagan-Murphy) and Lisa (Kirsten Deane), his lawyer wife, are arguing as we meet them. They have just gotten out of the sack and she is complaining that the reason that they’re 180 degrees shy of heaven is that he is performing with Flacido Domingo. Greg’s been recording the snipes and not so veiled insults of wife Lisa for a long time, and doesn’t mind reminding her of them. As a result some fun moments at the ensuing party flip on a dime from delightful good fun to shoot the moon marital arguments.
Carl (Brock Benson) and Kelly (Smara Bridwell) comprise couple number three. He’s a horny goat and she’s just one lamb in the flock. An example of their dialogue: “I crave you.” You crave everyone.” “Yeah. But you’re one of ‘em.”
The sarcastic humor delivered by Patty Ionoff is hilariously delivered. Joan’s character has been sweeping Phil’s philandering under the rug and finally takes a stand for herself at the party she has planned for all three couples. And as one might expect all three couples have strikingly individual reactions to the swinger’s orgy that follows.
Carl fantasizes about swapping at the party. Joan gets a little cattier. The humor gets edgier and edgier. (It is The Edge Theatre after all!) Secrets will be told and everyone swapped.
Bellot’s character raises a startled banner. “There will be consequences. We have lives and families.”
Joan chooses Greg. Lisa chooses Carl. Kelly chooses Phil. Silhouetted behind scrims we get cartoonish visualizations of various sexual positionings. A little later O'Hagan-Murphy's Greg give us a sweaty wide-eyed revelation of what went on in the bedroom with Joan that's high comedy.

Some of the older adults in attendance seemed curiously quiet during this very funny romp. In this reviewer’s humble opinion naughty is nice. Come on folks! "Try to remember the kind of September..."I mean it's all just in fun!
This is the kind of show wherein one gets to see actors in a completely new light. And with this cast that light is favorable all round. It’s a cautionary tale done with a light touch and featherweight humor that’s amusing, entertaining and sometimes even poignant.
The minimalist set does what all sets of this nature are supposed to do – fade into the background in order to let the characters pop out more. The backdrop evokes the evening’s theme in floral terms with its simple line drawings of pollenating flowers.  It’s a charming entertainment. Go see it.