Central City Opera is proving that Rodgers and Hammerstein’s old warhorse of a musical, “Oklahoma” has not been put out to pasture. Their production of this landmark of the American musical theatre gives us a frisky colt that just won’t stop until we admit what a thoroughbred it is. 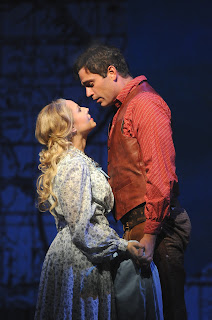 Matthew Worth’s performance of Curley is worthy of the trip to Central City Opera all by itself. When this actor strides through the auditorium to sing “O What a Beautiful Morning” you'll believe that you are on Broadway! Many of you, dear readers, hopefully heard him sing Jupiter in “Orpheus in the Underworld” and discovered what celestial singing was a couple of seasons back. 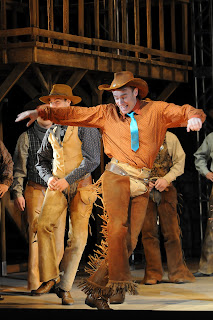 Curt Olds as Will Parker

This time he’s joined by Curt Olds (John Styx in “Orpheus”) as Will Parker. Thjs actor is a charismatic fireball of a musical theatre triple threat. His performance in the role of Will Parker is outstanding.

And even though mezzo soprano Joyce Castle doesn’t ever get to release that powerful instrument we all know so well, her portrayal of Aunt Eller is a solid joy throughout.

The team of director Ken Cazan and choreographer Danny Pelzig – remember “West Side Story?”-return to bless us with another smashing revival.
From overture to final curtain the Central City Opera orchestra makes Richard Rodgers' score an auditory banquet.


Conductor Christopher Zemliauskas paces the show "at a nice clip-clop, never rushing with the surrey with the fringe on the top."

Mosey on down and get tickets.

p.s. There are going to be two fully-orbed productions of this show at The Newmann Center at D. U. for those not able to get up the mountain. Call for dates and times.