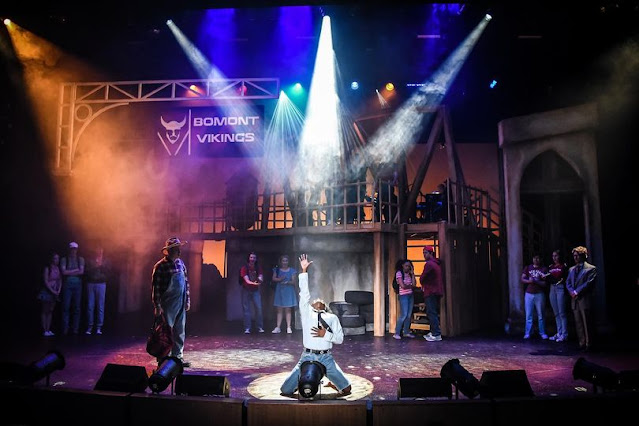 Pace Center’s production of FOOTLOOSE: The musical, starring Miracle Myles, is Not to be Missed!

Based upon the 1984 film of the same name, “Footloose, The Musical”

was nominated for three Tony Awards in 1999. The music is by Tom Snow, Sammy Hagar, Eric Carmen, Kenny Loggins and Jim Steinman. The lyrics are by Dean Pitchford, and the book is by Pitchford and Walter Bobbie.

When Ren and his mom move from the big city to a small rural town, the young man is not prepared to see how limiting the town’s “rules” are. The big issue is that dancing is forbidden.

When the minister’s daughter, Ariel, sets her cap for Ren, her abusive boyfriend, played with gusto by Nik Vlachos, decides to ruin Ren’s reputation.

Miracle Myles sings and dances up a turbo-charged storm as Ren, the role made famous by Kevin Bacon in the 1984 film. It’s an exhilarating performance, you will not want to miss!

As Ariel, Emery Hines enchants with a talent for singing and dancing that rocks!

Carter Edward Smith is hilarious as Ren’s buddy, Willard Hewitt. Smith does an exceptional job transforming this character from a cowboy with two left feet to a dancing dynamo. Smith’s rendition of “Mama Says” is hysterical.

Jeremy Rill stuns in the role of  Ariel’s father,Reverend Shaw. His singing of “Heaven Help Me,” and “Can You Find it in Your Heart,” are powerful! This actor really makes us feel the inconsolable grief of losing a son.

Nancy Evans Begley is luminous as Ethel McCormack, Ren’s mother. Katie Reid is brilliant as Ariel’s mother, Vi. "Learning to Be Silent,” the duet sung by the two mothers, is wondrous. Ms. Reid’s singing of “Can You Find it in Your Heart,” is truly heart-opening.

Some of the hit songs you’ll get to hear are: “Let’s Hear it For the Boy,” “Holding Out for a Hero,” “Almost Paradise,” “Somebody’s Eyes,” and of course, the title song, “Footloose.”

Kelly Van Oosbree directs and choreographs the show with consummate skill and artistry!