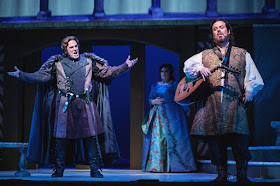 I’ve been waiting for two seasons to experience Central City Opera’s production of Verdi’s IL TROVATORE. Worth the wait on all counts, this is Grand Opera of true magnificence.
The complex plot is made simple to understand because of director Joachim Schamberger's brilliant concept!  This opera and the play on which it was based, were penned in an era in which it was considered to be tasteful to have the characters only talk about the violence and gore in their world, rather than to display it onstage.
Lucky for us, director Schamberger took into account the sensibilities of a modern audience, and opted to make those offstage scenarios visible above the stage as well as in an aperture behind it.
Some of the glorious vignettes depicting the offstage action are lit so exquisitely by master lighting designer David Martin Jacques, you may feel as if you’re seeing classical paintings come to life.
The look of this production owes a great deal to the genre of Fantasy, which includes such works as Game of Thrones and the Lord of the Rings.  Just as in those quasi Medieval productions, cruelty is often couched in visually stunning imagery. In IL TROVATORE, some of Verdi’s most beautiful music is paired with disturbing atrocities. 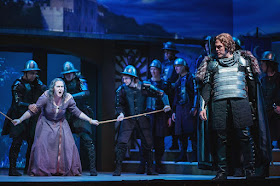 The casting is sensational! For this opera CCO has brought back the outstanding cast of TOSCA!
Michael Mayes, who thrilled us as Scarpia, is Count Di Luna. Jonathan Burton, whose Cavardossi stunned, is Manrico, and Alexandra Loutsion , who dazzled us as Floria Tosca, has been cast as Leonora.
Add to this the magnificent mezzo soprano of Lyndsay Ammann as Azucena and Ashraf Sewailam’s profound basso as Ferrando, and you have a cast of dreams!
Casting against the traditional choice of two buff, muscular men pounding out the percussion in the famous Anvil Chorus, CCO has opted to have two strong, beautiful women hammer it out.
The costume design by Dana Tzvetkova, with its armor for the men and fur-collared gowns for the women, assists in creating the illusion of Medievalism.
Conductor John Baril elicits all the dynamic passion and power of Verdi’s score from Central City Opera’s ear-pleasing orchestra with glorious ease.
A riveting and visceral production of one of the best loved Verdi operas, this is Grand Opera at its finest!

Just as I had to wait for two seasons to experience CCO’s IL TROVATORE, now the wait is on for their production of Benjamin Britten’s “BILLY BUDD” next summer. Having seen this company’s breathtaking productions of Britten’s GLORIANA and A MIDSUMMER NIGHT’S DREAM, the chance to see and hear them do BILLY BUDD will be a dream come true!Marlowe's Musings