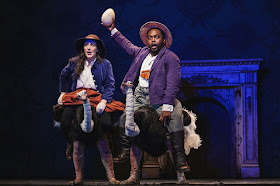 Director Alessandro Televi’s vision for Central City Opera’s production of THE MAGIC FLUTE will make the most jaded opera-goer feel as though he were attending Mozart’s masterwork for the very first time. You will be enchanted from curtain to curtain!

Mozart wasn’t doing well in the period just prior to composing THE MAGIC FLUTE. Money was scarce, and his wife, Constanze, was not well. When his friend, Emanuel Schikaneder, proposed the idea of working on an opera based on a play involving magic, humor and Masonic ritual (both men were Masons), Mozart agreed. As Mozart set to work on the musical composition, Schikaneder, who would later play Papageno, wrote the libretto. The opera appeared in 1791, having 100 performances, and becoming one of Mozart’s most popular operas.
Alessandro Televi’s directorial concept for the opera allows us as audience to view our young hero, Tamino’s, journey through the eyes of three spirits (in this case, three very talented little boys from the Colorado Children’s Chorale.)
Their mother is the Queen of the Night in this production.  Sarastro, the high priest at the Temple of Isis and Osiris, is their father.
As the Queen of the Night, Jeni Houser gives a virtuosic performance. Scaling the musical heights with her exquisite coloratura, this Diva dazzles us.
Kevin Langan has played the role of Sarastro numerous times over the last two decades. His superb basso delivers the hymn-like “O Isis, O Osiris,” magnificently.
In his journey to and through the ritual cleansing of fire and tears at the Temple, Joseph Dennis provides a strong stage presence and a superb tenor as Tamino.
You will fall in love with Will Liverman’s  Papageno, the bird catcher.  Liverman’s performance is most memorable in both the singing and the acting.
Katherine Manley is a fetching Pamina with a gorgeous soprano.
The harmonies delivered by the Three Ladies (Tasha Koontz, Kira Dills-DeSurra and Melanie Ashkar), who follow Tamino throughout the opera, are nothing short of divine.
Under the baton of conductor, Andre de Ridder, Mozart’s sublime score receives exquisite treatment from the luscious Central City Opera orchestra.
Madeleine Boyd’s scenic design is eye-pleasing indeed.
Susan Kulkarni’s costumes are eye-popping! Besides a nod to the costume design of Downton Abbey, Ms. Kulkarni leans into the look of 19thcentury German circus posters with her imagining of Papageno, the bird catcher. Here he and his love, Papagena(Veronique Filloux),  are seen as half human and half ostrich. Whimsical magic!
David Martin Jacques’ lighting design delivers the supreme best in mood-altering, scene illumination. He’s a master of the craft and has done this great work for virtually every season except one for two decades. Marlowe's Musings

Or go online at Centralcityopera.org