RODGERS AND HAMMERSTEIN’S THE KING AND I
THE BUELL THEATRE: JANUARY 2 -14 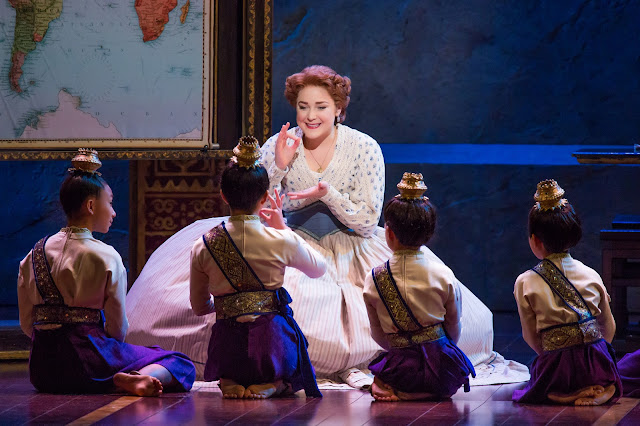 Madeline Trumble as Mrs. Anna
Rodgers and Hammerstein’s musical, “The King and I” is one of the most beloved in the American musical theatre canon. It’s based upon Margaret Landon’s novel ,“Anna and the King of Siam,” which is in turn based upon the novels of Anna Leonowens, which describe the five years that she lived in the Siamese court.
Rodgers and Hammerstein’s decision to create the story as a musical resulted in Tonys for the original Broadway production as well as for two subsequent revivals. The Twentieth Century Fox motion picture directed by Walter Lang in 1956 was nominated for nine Oscars, and won five.
This heart-opening production now on view at The Buell Theatre is a banquet for the eye, the ear and the heart.
Yul Brynner, who played the king both on Broadway and in the film, won a Tony for the former and an Oscar for the latter.   It is no small achievement that Jose Llana has managed to make the part his own. Mr. Llana delivers a commanding performance that is laced with tenderness and great good humor.
Madeline Trumble is delicious in the acting and singing of the role of “Mrs. Anna.” This actor is such an enchanting presence upon the stage as to make this evening of theatre a reason for celebration.
Q Lim’s performance in the role of Tuptim provides us with a soprano that stuns.
The show is chock-full of musical numbers that you’ll be humming and singing for days. Among these are such classics as: “Shall we Dance,” “I Whistle a Happy Tune,” “Hello, Young Lovers” and “Getting to Know You.”