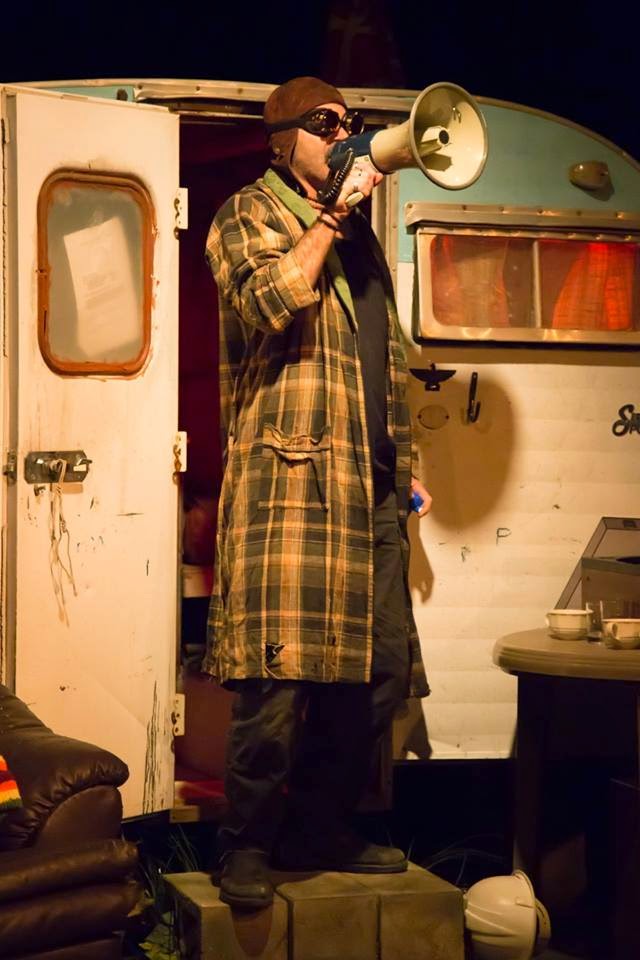 Set in a dump of an English trailer park on St. George’s Day, Jez Butterworth’s “Jerusalem” is a richly imagined, provocative work of art.
It’s an allegorical wake-up call bellowed from a bull horn and hammered on a copper drum that cries out for the change a bit of civil disobedience… or some spiritual giants … can create.
The play opens and closes with visits from the local authorities who, threaten to evict Johnny “Rooster” Byron from his squalid trailer park digs.
Augustus Truhn’s performance in the central role of Rooster is cause for celebration. Truhn is one of Colorado’s finest actors and it’s thrilling to see him in a role that really showcases his talents. Local favorites Mark Collins, Emily Paton Davies and Mark Stith turn in very fine performances in supporting roles. New to this reviewer were John Brown (Ginger) and Rick Williams (Professor.) Both are actors one hopes to see again soon in future cast lists.
Some may find Rooster a Christ figure while others may confine themselves to the idea that he is rather a slacker/ne’er do well in the vein of a pied piper such as the Fagin of Charles Dickens’ “Oliver.” Is it possible that he’s an amalgam of the two? You decide.
And although the mostly young misfits and outcasts attracted to Rooster’s shabby sylvan oasis find it full of Dionysian perversion including drugs and alcohol they also find a certain camaraderie and sense of belonging that’s missing in the homes of their uncaring dysfunctional families. So one might ask ‘what is the great perversion?’ Could it be simply refusing to accept the rules of a reality that don’t work for its citizens in a society spinning out of control filled with thug-driven machines intent on destruction?
The sound of the language that wordsmith Butterworth puts in the mouths of his characters is delicious to the ear, and although there are multiple profanities within it, the unfamiliar slang terms make one feel as if he were hearing our mother tongue for the first time.
Christopher Waller’s outstanding set design describing the squalor in which ‘the dude abides’ (sorry!) is enhanced by the lighting and sound designs of Kevin Taylor and Ren Manley respectively.
Director Warren Sherrill has done a great job casting the show. His pacing works most of the time even when doing battle with Butterworth’s rather lengthy play.
“Jerusalem” comes with high recommendations from this reviewer’s desk.
The Edge Theater presents
"Jerusalem"
Apr. 24 - May 24*
Fri./Sat. @ 8 p.m.; Sun. @ 6 p.m.
No Show on Sunday, May 10 / Industry Night, Mon., May 11 @ 8 p.m.
Tickets: $26/ $16 on May 11
303-232-0363 or online at www.theedgetheater.com.
The Edge Theatre, 1560 Teller Street, Suite 200, Lakewood CO 80214. Free Parking.
For mature audiences
* note date changeMarlowe's Musings

Posted by David Marlowe Theatre Reviews at 9:37 AM