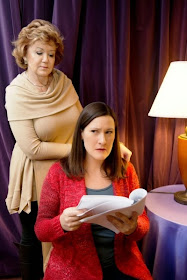 “Other Desert Cities” Is a Pulitzer Prize nominated drama with a deliciously unpredictable script.  Playwright Jon Robin Baitz has done a masterful job of penning a script that makes audiences do a complete reversal of their preliminary vision of his characters in Act Two.
After being gone for six years, Brooke Wyeth returns to her parents’ home in Palm Springs, California with her new novel in hand. It’s Christmas and Brooke announces to her parents that she’s about to publish “a memoir” describing a tragic event in the family’s past that opens a deep emotional wound.
Molly Killoran portrays Brooke Wyeth with the exact right petulant look and peevish expressions as the rebel of this dysfunctional family.
Jan Cleveland portrays Brooke’s mother, Polly, as a witty if bigoted conservative at the top of the play and later as a furious matriarch as her daughter’s unforgiving assertions intensify. 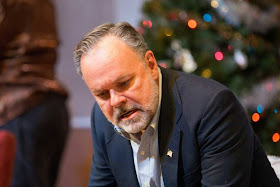 As Lyman Wyeth, Paul Page provides a nuanced portrayal of a man who struggles to remain the caring patriarch of this dysfunctional tribe even in the face of the merciless accusations of his daughter. 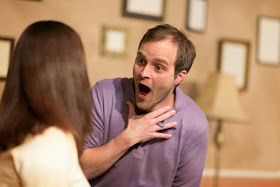 Luke Sorge turns in a completely natural performance in the role of Brooke’s brother, Trip.
Libby Rife portrays Silda Grauman, Polly’s alcoholic sister with a self-deprecating humor that changes to emotional anguish as her niece Brooke’s torrent of vitriol is unleashed.
Director Bernie Cardell has done a great job eliciting very fine performances from one and all in this intimate and compelling production. Cardell, who also designed the realistic set, wisely incorporates a wall full of empty picture frames that provides us as audience with a metaphor for blocked family secrets.