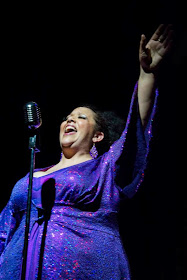 Anna High is a dream soaring to the heights as Effie White in Ignite Theatre's "Dream Girls." Hers is a powerhouse performance.
When she sings she commands the stage and when we hear the show stopper "And I'm Telling You I'm not Going".... what a gift!  (This reviewer had the privilege of seeing  the original production of “Dream Girls” on Broadway in 1982. It was nominated for 13 Tony Awards and won 6.)
Some of the other actors who stand out in this huge cast are Shanna L Woods as Deena Jones, Shandra Duncan as Lorell Robinson and Justin Spann as Jimmy “James Thunder” Early.
The very fine choreography by Reace Daniel and Jeffrey Parizotto adds to the overall enjoyment of this evening of theatre.
Trent Hines has done a great job with the music direction and strikes a fine balance between the orchestra and the actors and singers onstage.
Keith Rabin, Jr. has directed a glitzy crowd-pleaser of a production at Aurora Fox Arts. It’s got lots of flash and flare descriptive of the rise of a group of singers that will bring back memories of Diana Ross and the Supremes.

For tickets call the box office at 720-362-2697 or go online at www.ignitetheatre.comMarlowe's Musings