The Book of Mormon 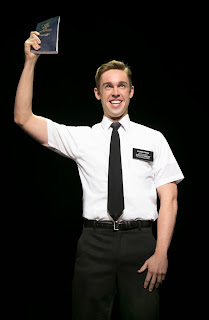 Nic Rouleau
From the moment one enters the auditorium of the Buell Theatre and sets eyes upon the magnificent frontispiece for “The Book of Mormon” he is aware that something on the order of a grand celestial event will occur when the curtain rises.  The crashing waves of what must by the Great Salt Lake seem to rise and blend with the luminous clouds of heaven as the golden image of the angel Moroni heralds good news from above the proscenium.
Everything about this production is high, wide and handsome. Directors Casey Nicholaw and Trey Parker have cast this show with triple threats.
The performance by Nic Rouleau in the role of Elder Price is outstanding both vocally and in the acting. A.J. Holmes as Elder Cunningham stuns 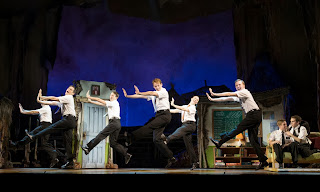 .
The choreography and the dancing thereof is exhilarating!
The humanity inherent in this seemingly blasphemous piece is so richly evident. Sometimes people forget to look below the surface of Great Art. Issues which are not topics of household discussion that are exposed include the circumcision of women and the annihilation of people in third world countries by the spread of AIDS.
The lyrics of the musical number “Turn it Off” which skewer the idea that all one has to do to eliminate his sexual orientation is to “turn it off like a light switch,” are hilarious. The book and lyrics for “The Book of Mormon” continue in the vein of the “South Park" authors’ reputation for being geniuses at showing us society’s foibles and fallacies. This is superbly done laser-sharp Swiftian satire!
Some of the musical numbers lampoon familiar songs from the canon of Broadway’s classics. “The Lion King” provides a zinger early in the show and the number near final curtain, in which the Africans perform their own personal misinterpretation of the history of Mormonism may remind those in attendance  of the “Small House of Uncle Thomas” in “The King and I.”
I missed “The Book of Mormon” the first time around.
This production truly is the second coming!
Single tickets for THE BOOK OF MORMON start at $35. To charge by phone, call Denver Center Ticket Services at 303.893.4100. TTY (for Deaf and hard-of-hearing patrons): 303.893.9582. Additionally, tickets may be purchased at the Denver Center Ticket Office, located in the Helen Bonfils Theatre Complex lobby. Buy
tickets online at tickets.denvercenter.org.Marlowe's Musings
Posted by David Marlowe Theatre Reviews at 8:52 PM