Theresa Rebeck’s “Seminar” is a play about four wannabe writers who have paid a well-known literary figure to take a look at their work and tell them what they need to know to succeed as well. The instructor they’ve chosen is honest beyond words and eviscerates their work with pleasure after reading a few pages of the opening of each of their texts.
The work is provocative and features one superior performance by one of Colorado’s best.  John Ashton turns in a studied portrayal of the embittered instructor. To this reviewer’s not so humble eye and ear Ashton’s delivery of the  role of the scruffy Leonard may well be the best performance by this artist to date. The co-author of one of Denver’s longest running plays “Murder Most Fowl,” Ashton shines in the role. 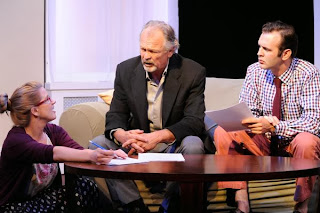 Devon James, John C. Ashton and Matthew Blood-Smyth
The four actors cast in the roles of his students are artists to watch for in every program. They are: Sean Scrutchins(Martin), Devon James(Kate), Matthew Blood Smyth(Douglas) and Mary Kay Riley(Izzy).
Rebeck’s play is full of wit, wisdom and vitriol. However … although it’s true that some critics may be able to get the flavor of a work in just a few pages one wonders if it might not be helpful to read the entire work in order to critique structure, theme and character. I’m just sayin.’
The publicity for this show describes the production as having “mature language and brief nudity.” Perhaps it is right about the language being somewhat “mature.” The “brief nudity” was however, quite simply out of place and just plain wrong given the time and place.
That said, the production is a worthy one coming with high recommendations from this reviewer’s desk. Ron Mueller’s set design speaks volumes presenting as it does the exaggerated contrast of the habitat of the neophyte writer and that of the seasoned professional. Stephen Weitz directs.