Closer
Vintage Theatre: 6/28 – 7/21
“Closer” won the 1998 Olivier Award for Best Play and it also garnered the 1999 New York Drama Critics Circle Award for Best Foreign Play. It’s also been translated into thirty some languages and provided the basis for a blockbuster film in 2004.
With Bernie Cardell as director one may rightly assume that there will be superb acting and direction.  And there is! Cardell has assembled a sexy and talented cast who, inhabit these soulless characters with brio and panache. 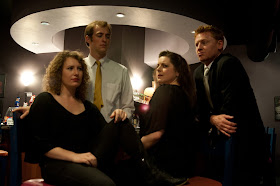 The ensemble includes: Eric Mather, Haley Johnson, Casey Andree and Erica Fox. Besides the fine casting Cardell has paced the show at a nice clip. If Patrick Marber’s play had a heart one might describe director Cardell as the consummate pacemaker. But it does not.
The ensemble is outstanding in its depiction of persons of the young and lusty variety whose favorite songs must be Pat Benatar’s “Sex As a Weapon” and “Love is a Battlefield.”
We are so accustomed to Eric Mather’s quick delightful comic ability this role is quite a departure. As an obituary writer Casey Andree allows us constant glimpses of his character’s vulnerability. Always watchable, Haley Johnson turns in a performance of layered nuance.
Newcomer Erica Fox is riveting as Alice, the stripper. One must be sure to search for her in the programs of any upcoming show.
The play is hot, sultry, in your face salaciousness.
Vintage Theatre presents
"Closer"
June 28 - July 21 Fri/Sat at 7:30 p.m.; Sun at 2:30 p.m.
$25 ($20 advance) 303-856-7830 or online at www.vintagetheatre.com
Vintage Theatre, 1468 Dayton St., Aurora 80010Marlowe's Musings