Central City Opera’s production of Rossini’s comic masterpiece “The Barber of Seville” is a feast for the ear and the eye! 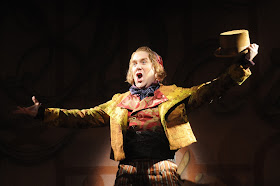 2010 Grammy Award Winner Daniel Belcher portrays Figaro, the matchmaking barber of Seville. You may remember Mr. Belcher from his superlative performances as the sly “Gianni Schicci” (2011) and Henry Cuffe in “Gloriana”(2001). 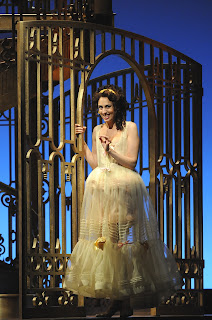 Jennifer Rivera is a fetching and silver throated Rosina. Her singing of the coloratura passages in Rossini’s gloriously melodic score is intoxicating.
The role of Rosina’s guardian, Doctor Bartolo is hilariously acted and thoroughly well sung by bass-baritone Patrick Carfizzi. You may remember Mr. Carfizzi from his astounding work as Bottom in “A Midsummer Night’s Dream”(2002), Pandolfe in Cendrillon (2007) and the Doctor in “Vanessa” (2005).
David Portillo is a memorable Count Almaviva. Alexandra Loutsion igives a strong vocal portrayal of Berte. One hopes to see and hear more of her work in future.
John Baril conducts the Central City Opera orchestra with a baton that keeps the musicians in the pit and the singers onstage in perfect sync.
Suggestive of  a festive 17th century Spain, Sara Jean Tosetti’s outrageously well-designed costumes are eye-popping throughout. David Martin Jacques’ lighting design dazzles. Scenic Designer Arnulfo Maldonado has created a magnificent set that has the songbird Rosina residing in a huge gilded birdcage.

The opera is performed in Italian with English supertitles.