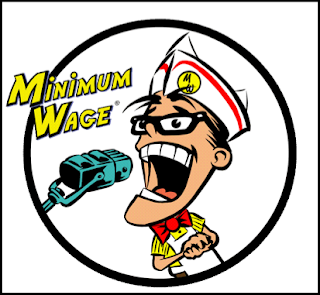 When you go to see “Minimum Wage,” being touted as “a rip roaring a Capella musical comedy directed by Nick Sugar” please know that you’re applying for a job in the wonderful world of fast food. And like the burgers these soda jerks flip you will be grilled at final curtain. That’s right. There’s a test.
The cast of pickle slicers and high tech griddle technicians is very fine indeed. It includes: Michael Bouchard, Keegan C. Flaugh, Damon Guerrasio, Abby McInerney and Carter Edward Smith.
Damian  Guerrasio is especially good with his machine gun patter about “Hamburgerology”. Michael Bouchard is in fine voice and a whirlwind of creative energy. The whole cast delivers a seemingly limitless variety of sly winks and grins as each and all do everything in their power to gain our indulgence for this cheesy fast-paced romp. Keegan C. Flaugh appears in one scene as Kookie the clown, a somewhat thinly veiled homage to Ronald Mc you know who. Ms. McInerney and Mr. Smith come to this musical after appearing in the critically acclaimed production of “Hair” also directed and choreographed by Mr. Sugar.
The singing of the a Capella tunes is AWESOME! The music is ear-popping throughout and to quote the lyricist “as infectious as a yeast infection.”
The harmonies are delightful and one supposes that the very young at Art will find the evening especially entertaining.
The choreography by Mr. Sugar is as goofy as the cartoon French fries and smiley-faced hot dogs adorning Tina Anderson’s Happy Burger scenic design. 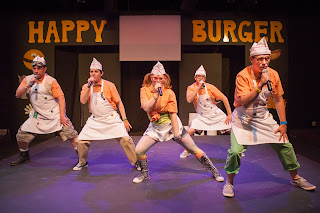 Left to right: Keegan C. Flaugh, Michael Bouchard, Abby McInerney and Carter Edward Smith
There are several nuggets of humor served up in this offering. However … to paraphrase burger boys and girls the world over the book for this musical is 'a few fries short of the proverbial happy meal.’
The songs near final curtain start to feel as though the show might have had a brain had the writers started with them and then super-sized them.
In a nutshell the show really cuts the mustard musically. Just remember to turn your brain off when you silence your cell phone.