Central City Opera makes Thornton Wilder’s “Our Town” sing! How lucky we are to have this superb opera company bringing us yet another in a long list of little known gems of the American Opera! 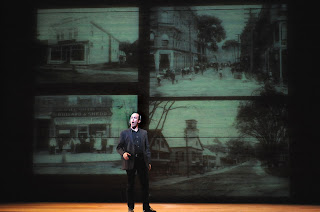 Vale Rideout
Vale Rideout is outstanding in his singing of the role of the Stage Manager. His voice is powerful and his stage presence commanding. William Ferguson and Anna Christy endear as young lovers, George Gibbs and Emily Webb. 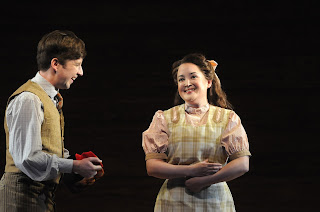 William Ferguson and Anna Christy
Ned Rorem’s score heightens the emotional impact of this piece more than ever before. Rorem begins the musical phrasing for each scene with a dissonant chord hinting at the fatalistic and segueing into the rich warm harmonics reminiscent of Aaron Copland’s Americana.
Stage director Ken Cazan gives the proceedings a thoughtful pacing that is neither too halting nor too hurried. Nevertheless … in his capable directorial hands the three acts seem to fly by in the same way Emily’s life does. Director Cazan and his cast and crew make us feel the sweet sadness of the quick passage of time as never before. 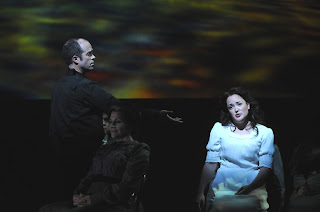 Vale Rideout and Anna Christy
Christopher Zemliauskas’ conducting of that luscious Central City Opera orchestra commands the greatest respect. It is to be hoped that Mr. Zemliauskas will continue to be featured on a regular basis at Central City Opera.
The innovative use of the minimalist furnishings together with David Jacques’ sublime lighting design and projections enhance the proceedings immeasurably.
Ned Rorem’s opera reiterates Wilder’s core concept that the saddest thing in life is not being present enough to be filled with awe and wonder upon seeing the magic and the miracles of everyday life.

For more information and to purchase tickets, visit www.centralcityopera.org or call 303-292-6700.